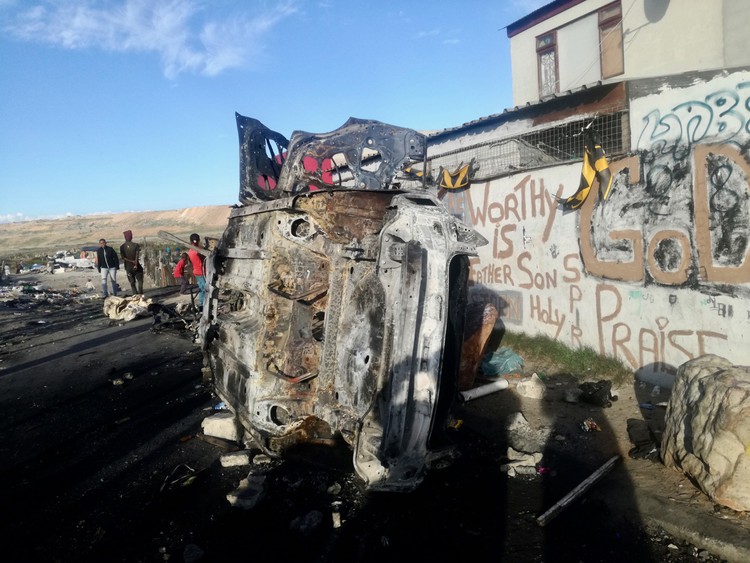 The Toyota SUV of Councillor for ward 67, Gerry Gordon (DA), was torched after she was confronted by residents protesting against shack demolitions in Vrygrond. Photo: Thembela Ntongana

At around noon on Sunday, Gerry Gordon (DA), councillor for ward 67, was confronted by angry members of the Vrygrond community. Her Toyota SUV was then set alight, according to police.

When GroundUp arrived people were busy stripping parts to sell from the burnt out car. Gordon had come to investigate a possible fire after the City of Cape Town had carried out shack demolitions.

Spokesperson for the police Captain Frederick van Wyk said during the demolitions, two people were arrested for public violence. He said a case of malicious damage to property had been opened regarding the councillor’s vehicle.

The land occupation of vacant ground known as Xakabantu started in April. After the first shacks were demolished on 17 April, there were protests and Prince George’s Drive was blocked. Following a meeting with Mayor Patricia de Lille, the occupation was briefly halted. Residents were later told that the land was a nature reserve and the City identified two nearby pieces of land for housing. Residents rejected the proposal saying the land identified was too small for housing and should be used to provide services which the community lacks, including a high school, clinic and police station.

A Vrygrond resident who is attempting to occupy the land and whose shack was demolished, Mphathiseni Nondaka, said he had just finished building his shack and had intended to move in on Monday.

He works as a security guard. He has lived in a two-roomed shack in the backyard of an RDP house in Vrygrond for six years. He lives with his four children. He pays R1,000 a month rent.

Nolubabalo Nojoko, a mother of four, also had her shack demolished. She had gone to do washing for someone to earn money. She said she had been living in the shack for a week.

“My clothes are scattered everywhere. Some are gone. I do not have money to keep buying clothes,” she said. Nojoko and others had already started rebuilding when GroundUp visited the area.