Community leaders unhappy with outcome of meeting with mayor 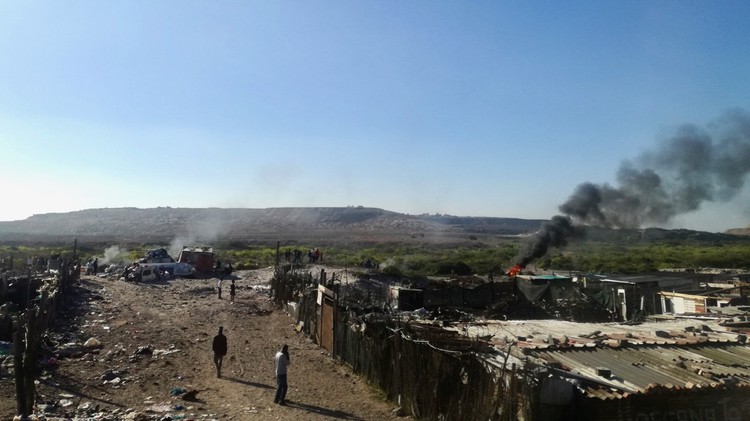 Backyarders wish to occupy this tract of vacant land in Vrygrond. The City of Cape Town says it is a nature reserve. Photo: Thembela Ntongana

Vrygrond community leaders say they are unhappy with the outcome of their meeting on Monday with City of Cape Town Mayor Patricia de Lille.

The meeting followed protests after demolitions of shacks erected on vacant land known as Xakabantu. Most of the occupants were backyarders and some residents from informal settlement Overcome Heights.

The day after the protest, community leaders agreed to halt the occupation until the mayor responded on Monday.

But community leader Daniel Nomavile said the Monday meeting was unsuccessful. “She brought us a map that said the land in question was declared a nature reserve. But when was this declared, because I used to stay on that land? My shack was there. Where was that endangered vegetation that they are telling us about now?” asked Nomavile.

He said when the City removed people from the land in 1999, there was no mention of it being a nature reserve. Instead, people were moved with the promise that the land would be cleared and levelled for housing development.

Nomavile said in the Monday meeting De Lille showed them two pieces of land that could be used for housing development.

“The land that she has identified is small and would not accommodate the number of people in need of housing in the area,” he said. Nomavile said the residents would not stop fighting for the Xakabantu land “because we know how much people are in need”.

Another community leader, Mikel Kumalo, said one of the two pieces of land De Lille identified should be used for services, not houses.

“What we are saying to the City is that as much as we want houses and land for people to stay, the piece of land that they have identified we want used to accommodate some of the many services we do not have in the community … We have no police station, library, clinic and high school, which would benefit the greater community,” said Kumalo.

He said the leaders briefed the community on Tuesday on the meeting with the mayor. Residents rejected her response and have vowed to occupy the land again. On Wednesday people had started to mark out plots once again.

The mayor’s spokesperson Xolani Koyana said the land that people had occupied was rezoned as a nature reserve a few years ago through a process facilitated by national government.

“The City of Cape Town will explore what action can be taken to free up any pockets of land in the vicinity for housing development,” said Koyana.

He said the community leadership was given information about a housing project under discussion, where the City will employ 55 residents from Vrygrond under the Expanded Public Works Programme to conduct a survey on the number of backyard dwellers in the area.

“The survey, which is to start from May, will assist the City to establish the number of people in need of housing in the area and to identify beneficiaries for the housing project,” said Koyana.