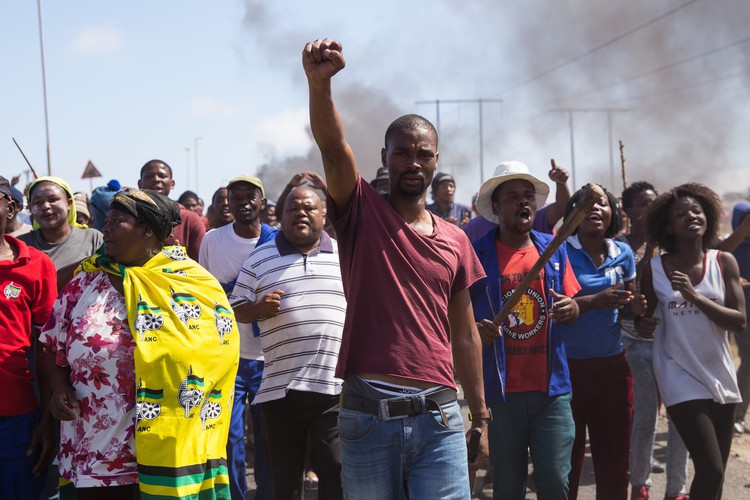 Over a thousand residents protested along Southern Bypass Street in Vredenburg on Wednesday. All photos: Ashraf Hendricks

About 1,000 people protested in Vredenburg on Wednesday for the second day in a row, demanding housing and cheaper water and electricity. Armed with sjamboks and sticks, protesters blocked the streets with burning tyres and rubble, preventing vehicles from entering or leaving.

Vredenburg is about a 135km drive north from Cape Town, on the West Coast.

The protesting residents said the municipality did not listen to their complaints.

They said they wanted more toilets in the informal settlement of Ongegund. They wanted to be charged separately for water and electricity because, they said, if they did not pay their water bills, their electricity was cut off. “You stay in the dark until you pay for your water,” said a protester who identified himself as Ayabonga.

Protesters said they wanted to be housed in the promised George Kerridge 512 Housing Project, which was meant to be completed by the end of October.

One person told GroundUp that police had, on Tuesday, shot rubber bullets at protesters who were running away. “All their scars are on their backs,” he said.

“We want the mayor to give us proper places to stay,” said a protester. “We want electricity, taps, toilets. Each and every house must have toilets and electricity. They say they will build houses when they want our votes. But when the votes are up, we don’t hear from them again. We don’t even know what the mayor looks like.”

“We have to make chaos so they can see we’re suffering,” said protester Gift Naki.

Protesters marched down Southern Bypass Street burning tyres and blocking the streets with rubble. The police watched, and used a water cannon to douse the flames at one of the intersections.

Provincial Minister of Community Safety Alan Winde said the police station had been stoned during protests yesterday. He said ten police vehicles had been damaged. “Unlawful attacks on the police are an attack on the whole community, and on the country’s Constitution,” Winde said. On Tuesday, 38 people were arrested for public violence according to News24. 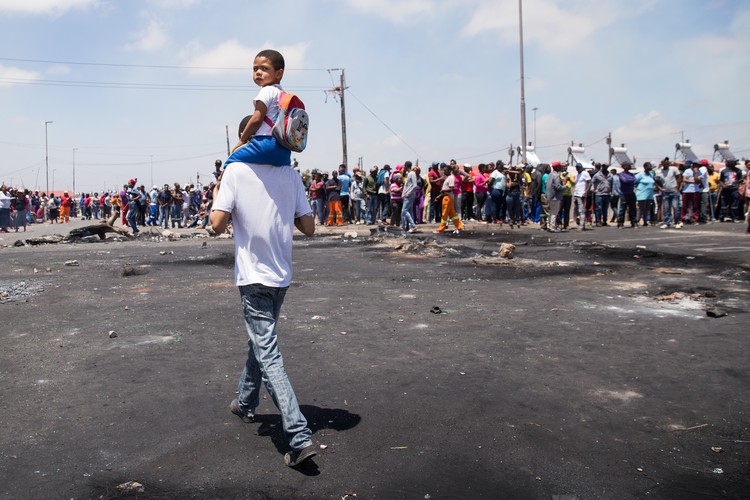 A man walks with a child on his back near the protesters. 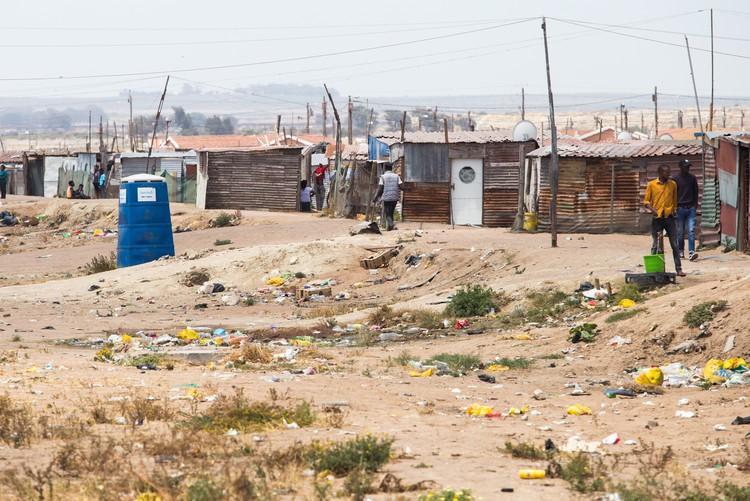 A portion of the Tsitsiratsisi informal settlement in Vredenburg. According to residents, one toilet services about ten families. 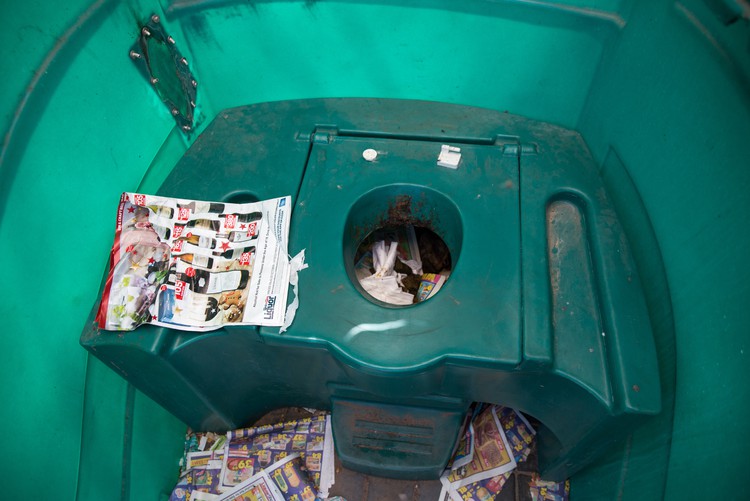 Residents claim that the toilets are cleaned once a month typically. 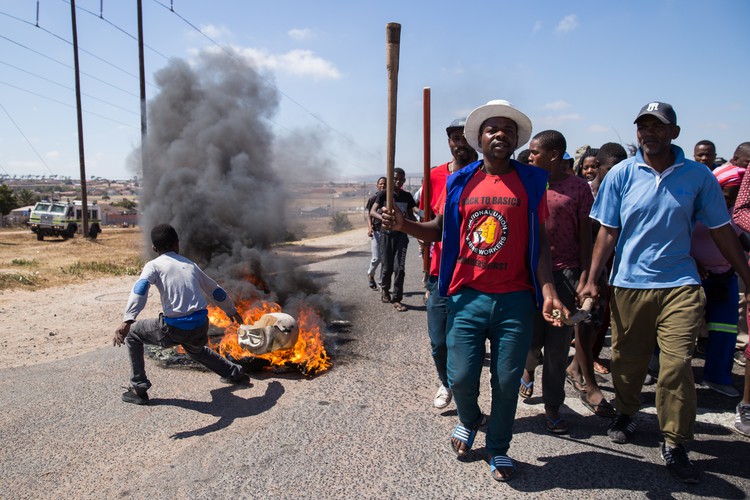 About 100 protesters marched through town. Some erected burning barricades. 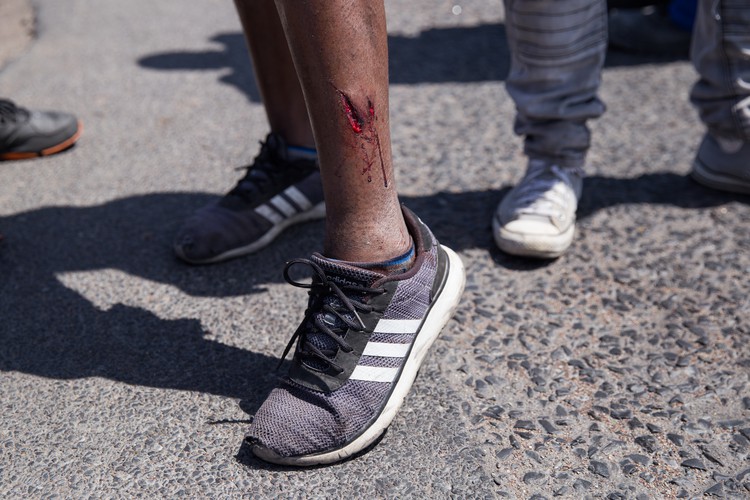 This resident claimed that police were arresting anyone trying to make their way into town. He was trying to get to work and hurt himself running away from police. He was also shot with a rubber bullet. According to the SAPS twitter account, one police officer was injured and numerous vehicles were damaged during the protest on Tuesday. 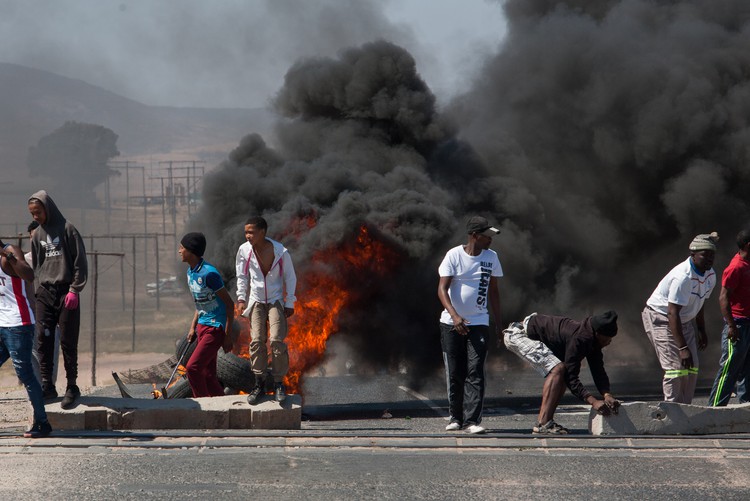 Protesters blocked a portion of Southern Bypass Street in Vredenberg. At the end of the first day of protest on Tuesday, over 30 people were arrested for public violence.