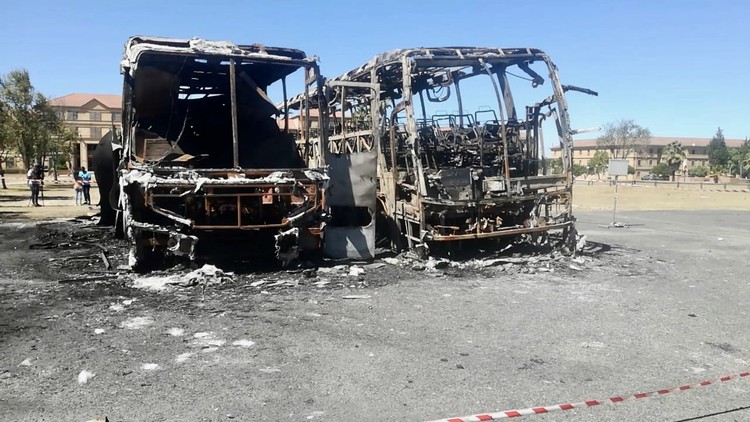 Two buses were set alight at the CPUT Bellville campus in the early hours of Wednesday. Photo: Velani Ludidi

Thirteen Western Cape College of Nursing students were released on R500 bail each on Wednesday after they appeared in the Athlone Magistrate’s court on charges of public violence. The students are set to appear again in court on 26 March. Initially 21 students (13 women and eight men aged between 20 and 24) were arrested, but nine were released.

On Tuesday, public order police dispersed students who were protesting at the Athlone campus of the Cape Peninsula University of Technology (CPUT). The Athlone protest centred on security issues.

Police spokesperson Frederick Van Wyk said, “The protest action has been ongoing for a week. They blocked the entrance to the campus and blocked Klipfontein Road with large concrete rocks. The institution has an interdict against any protest action by the students. Government vehicles were overturned and damaged by the protestors. The students were asked to disperse because the protest action was not permitted and deemed illegal. The Western Cape National Reserve Public Order Policing took action in dispersing the students when they started throwing stones.”

Meanwhile, two buses were set alight at the CPUT Bellville campus. A student leader, who did not want to be named, denied student involvement in the torching of the buses. “We were sleeping when the buses caught fire. We warned students not to get involved in any mischief because now private security will be brought in to victimise students with genuine issues that need to be addressed.”

On Tuesday, students had erected shacks on Bellville campus protesting over a lack of accommodation. The shacks were later demolished by campus security.

SRC member at the Bellville campus Luto Xakayi said, “After what happened overnight there was a meeting and our leaders are in that meeting. The university opened the walk-ins process [late registration] without first dealing with the students who need accommodation and that is what has caused the frustration. I cannot comment on the torching of buses because I do not know how it happened.”

CPUT spokesperson Lauren Kansely said: “Cases of malicious damage to property and arson were registered and are under investigation. No persons have arrested; no injuries were reported. The motive is unknown … We are urging protesters to carry themselves in an orderly manner that does not infringe on the rights of others.”

Kansley said the arrests of the students came “despite a mammoth seven-hour meeting between CPUT’s Dean of Students Prem Coopoo, representatives from the Western Cape Health Department, management of the Western Cape College of Nursing, and student leaders, reaching a number of positive outcomes on Monday evening.”

She said at the meeting most of the issues raised by students had been resolved. These included: four full time security guards to address security concerns; the commissioning of a borehole to solve water and sanitation problems; extended library hours; and the reinstatement of an inter-campus shuttle. A monthly feedback session with SRC and management of the various stakeholders was also agreed to.

She said teaching at the college of nursing was suspended though it was open and staff were there. “The rest of CPUT is open and operational,” said Kansley.