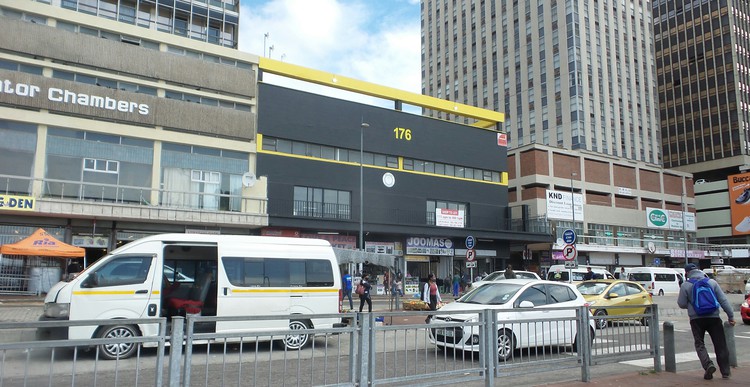 A taxi waiting for passengers on Govan Mbeki Street, opposite the main taxi rank in Gqeberha. Taxis usually park here to chase away e-hailing drivers who pick up or drop passengers at the popular taxi rank. Photo: Joseph Chirume

No Bolt drivers will be suspended or blocked if they reject rides that start or finish at the Greenacres Shopping Centre in Gqerberha, the e-hailing service provider has confirmed.

This follows e-hailing drivers being assaulted and targeted, allegedly by minibus taxi operators who accuse them of “stealing” their customers.

“My family always prays that I return home safely because the violence targeting e-hailing drivers has intensified,” says Edmund.

He is among dozens of e-hailing drivers in the town who have been attacked in recent weeks.

“We have reached a point where e-hailing drivers are not safe. I was followed by two taxis early in August. I picked up a passenger at Greenacres Shopping Centre and they followed me to the client’s home in Schauderville,” he said.

Edmund was retrenched from the restaurant he worked at for 15 years due to the Covid-19 lockdown last year. He said several incidents involving taxi drivers have occured since he started. One tried to knock his car and another taxi driver once took his car keys from the ignition and forced his passengers to get out. “They wrote down my number plate before returning my keys. I was traumatised because they were using violent language.”

“I wish I could get another job because I don’t know what they will do next if they find me picking up passengers again,” he said.

Another driver, who also fears retribution by taxi operators, recounted how he was attacked in July. “I picked up a family in Summerstrand. I had barely travelled a few kilometres when a fleet of taxis forced me off the road. They took my keys and phone before snatching the R400 I had collected for that day.”

The driver said he now chooses to operate at night when taxis are off the road.

Mzwanele Qwabe of the Uncedo Taxi Association refused to comment. But a taxi driver who spoke on condition of anonymity said, “We only allow e-hailing vehicles in the metro who have valid passenger carrying permits. Traffic police arrest taxi drivers if found without a passenger permit. Why should Uber and Bolt be allowed to do their business without permits?”

Gareth Taylor, regional manager at Bolt, refuted that their drivers did not have the necessary permits. He said that they are aware of the “recent intimidation incidents” against Bolt drivers at Greenacres Mall.

“Every person has the right to earn a living and move around without risk of harm, coercion, or fear of death or injury,” he said.

As a compromise, Taylor said Bolt has identified specific pick-up and drop-off points outside of the mall. “These locations are far from where taxi operators park. Bolt is also asking Greenacres Mall to have clearly signposted dedicated areas for e-hailing drivers and riders,” he said.

Taylor also encouraged drivers to use their safety measures which include an App that shares the driver’s details and location with Namola’s 24/7 call centre, which if needed deploy private security and emergency services immediately.

“Bolt does not have a driver centre in Gqeberha. The platform partners with a local organisation that conducts vehicle inspections and driver background checks for drivers looking to sign up. Drivers have a number of channels available to them to raise any concerns, such as email, in-app messaging, and a phone support line which is available seven days a week,” he said.

Police spokesperson Colonel Priscilla Naidu confirmed that a meeting was held with taxi operators on 24 August at the Greenacres Shopping Centre rank to discuss the impasse.

Naidu said both taxi and e-hailing drivers were warned to respect the law. She said more meetings between the groups are expected soon. “To date no cases of intimidation or theft of money have been opened by e-hailing drivers. However, there are allegations that taxi drivers are harassing the e-hailing drivers.” No further details about the meeting were given.

She encouraged victims to report each incident to police, adding that they are monitoring the situation.

Messages and phone calls to Unathi Binqose, spokesperson for the Eastern Cape Department of Transport have gone unanswered since 3 September.