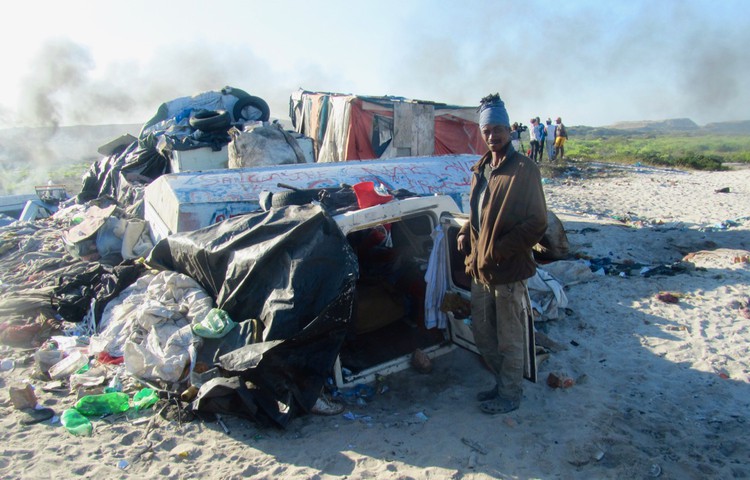 Stones and debris from burnt tyres blocked Prince George’s Drive on Tuesday after protests erupted in Vrygrond on Monday night. Schools in the area were closed. Police and metro police in cars and a Nyala were monitoring the situation.

At the Capricorn Square Shopping Centre private security stood in front of a Pick ’n Pay liquor store that had been looted on Monday night.

According to community leader Linamandla Deliwe, violence erupted in Vrygrond after a Red Ants eviction squad accompanied by metro police demolished shacks on an open piece of land. Deliwe, a member of the Vrygrond Community Development Forum, said residents had tried a number of times to engage with the City of Cape Town, but without success.

The land occupation started on 14 April. There is a currently a recycling centre and a small farm with pigs and chickens on parts of the land.

“People are tired not only of empty promises but of being ignored. They are tired of paying huge amounts of rent when most of them are unemployed … The community is overcrowded, but the City is telling us there is no land,” said Deliwe.

The land occupiers are backyarders from Vrygrond and people who have been renting shacks in Overcome Heights informal settlement.

“The City has failed to give us this land, we are now taking it,” said resident Nomathansanqa Nomtshongwana. She had been living in a one-room, backyard shack in Vrygrond with four children. “I am using my disabled child’s grant for rent because I am unemployed. The money is meant for her, not me, but there is nothing I can do,” she said.

Nono Zozo came from Overcome Heights, where she paid R600 rent and R100 for electricity per month. “I depend on my [three] children’s grants, but it is not enough for the fees and renting,” said Nono. She said she had been considering doing sex work.

Among the land occupiers are a group who live under an old boat and four bakkie canopies. Esmeralda Martin lives under the boat with her two children. She has been there for six years. “This is no way for anyone to live,” Martin told GroundUp.

“Now that the City destroys the shacks every time, I have no choice but to live in the car canopy,” said Reuben Pasqualie. “The City moved me away from my mother’s house [when she died] because it was a council house.”

Spokesperson for the Western Cape police, Captain Frederick van Wyk said three people, two men aged 16 and 34, and a 27-year-old woman, had been arrested. Three cases of malicious damage to property and one case of public violence were registered.

Ward councillor Gerry Gordon (DA) addressed about 100 angry residents on Tuesday. “While your cause is very noble … we have elements destroying the business park and that is not right,” said Gordon.

She said there was a court case over the land between the City and the recycling operation. “At the present moment we are waiting on the outcome of that court case,” she said.

Zara Nicholson, spokesperson for the mayor, said, “Executive Mayor Patricia de Lille has agreed to meet with the community leaders. As with all communities, the Mayor is committed to working with the community of Vrygrond to find solutions that will benefit them. The Mayor is however clear that the meeting cannot go ahead while people continue to illegally occupy land and affect the lives of other residents by blocking roads.”

Many land occupiers started putting their shacks up again on Tuesday before Gordon had finished speaking. They were joined by others after Gordon left.