Violence erupts in Hout Bay as City attempts to reblock 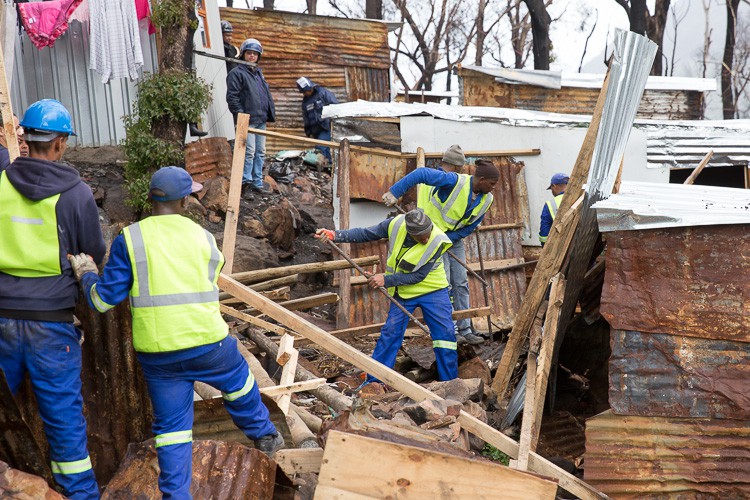 At the centre of the conflict is the issue of reblocking. The City and some residents want to reblock Imizamo Yethu so as to lessen the impact of fires, such as the devastating one of 11 March. But for reblocking to happen many shacks that have been erected since the fire have to be demolished. See Why did Hout Bay explode?

Despite ongoing negotiations between the City and community representatives, a mutually beneficial solution could not be agreed before the Anti-Land Invasion Unit was given the go-ahead to demolish the shacks.

Violence erupted when a group of young boys started throwing rocks at police officers. The officers retaliated with stun grenades and teargas. One of the boys told GroundUp that he wanted the City to provide them with materials and allow them to rebuild their shacks in peace.

The home of Kenny Tokwe, a community leader in Imizamo Yethu, was burnt down. Tokwe supports reblocking. He said it will help develop the community. Tokwe said that people who oppose reblocking came to his house while he was not there, but his children were. When they could not find him, they decided to burn down the house. He said his children are safe, and one of them managed to save his music equipment before the house was burnt. Tokwe has lodged a complaint of arson with the police.

ENCA has reported that another house was also burnt down.

Yolande Hendler from The South African Alliance of Shack Dwellers International (SA SDI) explained that reblocking (called super-blocking by the City) aims to create pathways and roads for better service provision. It would allow emergency vehicles to respond when a fire breaks out. The City of Cape Town committed over R90 million to reblocking Imizamo Yethu after the March fire, but the community has been split over how this is to be carried out. For example, community Leader Pamela Sofika, who has also been a resident of Imizamo Yethu for two decades, accuses the City of making little effort to speak to people on the ground.

In April, Mayor Patricia De Lille announced that the City had been given the go-ahead for reblocking by the whole community. But Sofika disagrees, claiming that those present at the meeting held by De Lille were opposed to the idea. Sofika said that she owned a three-roomed shack where she resided with her son and daughter. After the fire, she kept rebuilding her shack when she could afford the materials. One of her concerns is that reblocking will provide everyone with a much smaller shack when she stayed in a relatively spacious one prior to the fire. “It is already degrading enough to live in a shack. Now I must be further degraded by staying in a 3x3 metre [squared] shack”, she said.

Noluthando, a 33-year-old resident who was affected by the fire, said: “My heart is bleeding, I have nowhere else to go”, as she watched the Anti-Land Invasion Unit demolish her shack. She said that she was still in the process of rebuilding her shack and now she cannot afford to live somewhere else.

Zara Nicholson, spokesperson for the mayor, said that police and other law-enforcement removed “52 illegally erected and unoccupied structures in accordance with an interdict and as per the agreement reached with the community leadership on Monday evening”. She said this was to progress with reblocking, and “installation of services for the fire-affected beneficiaries.”

She condemned the “ensuing violence as it will go against the spirit of this negotiated process”.