Norris Phaswana was left to fend for his family at 15. Today he is a successful trader 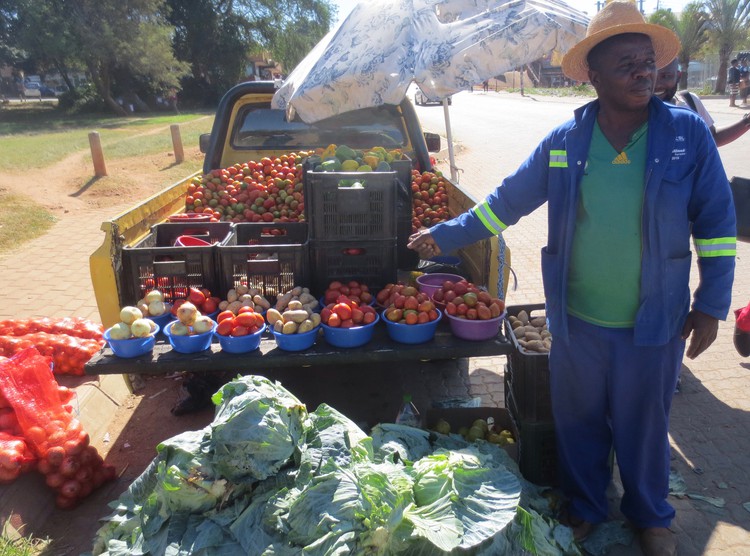 Norris Phaswana sells fruit and vegetables off the back of his bakkie in Louis Trichardt. Photo: Bernard Chiguvare

Fruit and vegetable vendor Norris Phaswana started earning money from trading when he was 15.

Today, Phaswana, 44, sells fruits and vegetables from his old Toyota Hilux bakkie, in Kruger Street, Louis Trichardt. He supports a wife and eight children from his business.

He comes from Nzhelele, about 30 km from Louis Trichardt. The family was poor and Phaswana started dropping out of school and roaming the streets of Louis Trichardt looking for food or work.

“One day I met a man from Zimbabwe selling cigarettes. I asked him if he could trust me to sell some of the cigarettes for him. We had some form of contract. I sold the cigarettes at school during break and lunch time. My clients were the learners,” says Phaswana.

In 1990 his father died and his unemployed mother could not afford to pay his school fees or give him money for lunch. The cigarette sales were not bringing in enough money and Phaswana had to drop out of school. He struggled to get work and in 1993 went to Pretoria where he worked at a spaza shop for almost two years.

“It was very difficult for me to work far away from my mother and sister. I knew it was my responsibility to look after them, so I decided to go back home in 1995.”

He found it very hard to get work but managed to get a few odd jobs and to save R300.

He decided to use his savings to start a small business.

“I had to hunt for the Zimbabwean man selling cigarettes. I fortunately met him and this time I had to buy from him and sell for myself. Out of the R300 I managed to buy three cartons of Kingsgate. I sold the cigarettes in the streets and also at home in Nzhelele.”

“I managed to look after my mother and my sister but luck quickly ran out as police suspected that I was dealing in drugs. They raided our home several times, confiscating my cigarettes, until I gave up the business,” he says.

“Since I moved to this place business has been viable,” says Phaswana, picking up cabbages leaves to throw away.

Every day he drives his old Toyota Hilux from Madombizha where he lives with his wife and four of his eight children. His mother died in 2016. One of his daughters has recently completed a nursing course.

“I am able to educate and provide food for my family from this business. Thursdays, Fridays and Saturdays are my busiest days because people will be preparing for funerals and they know I always supply fresh quality tomatoes and cabbages. I am now supplying some restaurants around town,” he says. A full load of tomatoes on his bakkie lasts for two days. He buys from nearby farms.

Phaswana has advice for people in difficult economic circumstances: “Find a way of starting a small business that could generate income for yourself.”