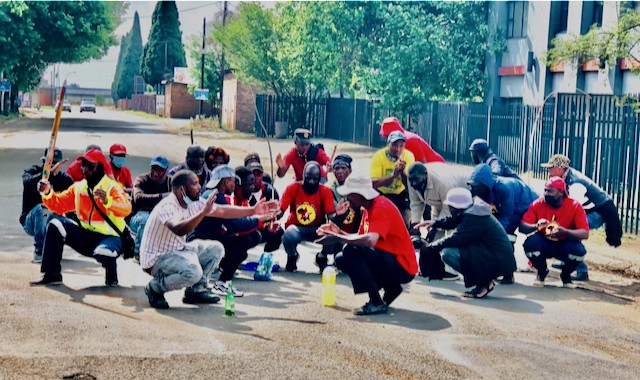 The general secretary of the South African Federation of Trade Unions, Zwelinzima Vavi, has called on unions to embark on a general strike in support of striking steel industry workers if their wage dispute is not resolved.

At a briefing in Johannesburg on Friday Vavi said, “SAFTU calls on all SAFTU unions and non-affiliated across the economy to file urgent secondary strike notices in support of the engineering strike led by NUMSA.”

Along with the wage increase, NUMSA is demanding ten days paternity leave, five days family responsibility leave per occurrence, and a travel allowance of R1,000 a month. It wants the increase backdated to 1 July.

NUMSA said on Thursday that a new proposal from the main employer association, the Steel and Engineering Industries Federation of Southern Africa (SEIFSA), would be discussed with members in the regions from Friday.

SEIFSA CEO Lucio Trentini said employers in the steel sector cannot afford the 8% increase because companies are struggling to recover from the impact of the Covid-19 pandemic.

“This strike could potentially result in some companies having to declare closure at a time when we should be doing everything possible to protect all jobs in the sector and encouraging employers to invest in plants and equipment in order to generate growth and create much needed jobs,” he said.

“The current offer on the table promises above-inflation increases for the next three years on a base entry-level and all-inclusive package of above R12,000 per month,” he said. He said a general labourer currently earns R49.55 per hour, working an eight-hour day over a 40-hour work week. (According to Statistics South Africa, the inflation rate at the end of August 2021 was 4.9% a year.)

Asked whether employers could meet NUMSA’s other demands, Trentini said, “The industry already recognizes paternity leave, as recently enacted in the revised Basic Conditions of Employment Act, and Family Responsibility Leave. Unfortunately adding an additional R1,000 a month for travel is simply unaffordable.”

But several workers interviewed by GroundUp said they were earning less than R49.55 an hour.

Paul Legau, a forklift driver at a company in Germiston, said he would not accept an increment below 8%. “I am currently rating R30 an hour,” he said. “Employers are playing with us and they do not care about our needs. For the past three years l have been earning the same amount. What will my family eat?”

Another Germiston worker, Sifiso Sibiya, said: “Inflation is soaring high, even bread is expensive yet our pay remains stagnant. Some of us are earning as little as R21 an hour; it’s an insult. The companies we are working in are upgrading their machinery. When will they upgrade our pay?”

Workers in Germiston marched at industrial areas on Friday, looking for “rats” whom they claimed were continuing to work behind their backs. They said they would take turns to march around work places throughout the weekend. GroundUp saw altercations with police who were monitoring the strike. They accused workers of causing disorder.

In Vulcania, Brakpan, workers complained that company security guards were firing gunshots and intimidating striking workers to keep them away

Chairperson for Brakpan Zacharia Tsabalala NUMSA said, “ We are afraid for our lives. Guns are being fired and we are being chased away from the vicinity of our workplaces. But this will not stop us. It’s high time we got the pay raises we deserve.”

On Thursday, NUMSA said workers had been shot at with rubber bullets by police while picketing. The union would open a case with the Independent Police Investigative Directorate (IPID), NUMSA said in a statement. Other strikers had been attacked by private security companies, the union said. In Wadeville, a worker had died, apparently when a motorist “ploughed into” a group of workers waiting to be picked up to join a march.

In the briefing on Friday, Vavi said SAFTU would also issue a 14-day notice to embark on a general two-day national strike in response to what he called “the attacks on the working class”.

He said SAFTU rejected the increase of VAT to 15% and considered the national minimum wage too low. SAFTU was also calling for higher social spending. He applauded NUMSA for its fight.

“Employer associations are hell-bent on reversing the gains of the past on rates of pay and working conditions,” said Andrew Chirwa, NUMSA president, during the briefing. He said the strike would continue until demands were met.