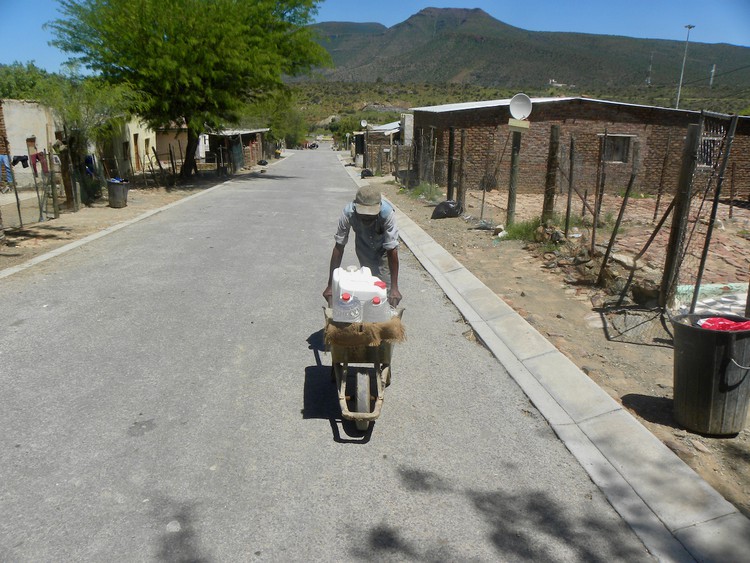 Sporo Matiasi pushing a wheelbarrow filled with buckets of water he filled at a relative’s house in another section of Khayelitsha, Graaff-Reinet. Photo: Joseph Chirume

Despite welcome rains recently, the Eastern Cape remains in the grip of a terrible drought. Residents in Graaff-Reinet, home to 40,000 people, told GroundUp their taps ran dry last year. Some residents get water for a limited period per day.

On Friday, the Nqweba dam level was at less than 8% capacity. It is the main source of water for the town.

The municipality received R30 million from Treasury for drought relief. This covers borehole drilling, and equipping and installation of pipelines. Currently 28 boreholes are operating. Water tankers are servicing the worst affected areas.

Resident Sporo Matiasi said, “It is a daily struggle to get enough water to use in our homes. We have to move from section to section of our townships with empty buckets looking for water. At times the municipality provides water tankers but the water is not enough and there are always long queues.”

Matiasi was pushing a wheelbarrow with buckets of water he had filled at a relative’s house in another section of Khayelitsha, Graaff-Reinet.

Wandile Mavuso of New Location, said, “My grandchildren sleep late at night after spending their time queueing for water. This is taking a toll on their school work.”

Corene Conradie of Graaff-Reinet Water Crisis., who acts as a coordinator for Gift of the Givers in the area, said: ”It is sad to see how children walk long distances with buckets of water on their heads. This is the legacy they will grow up knowing. They leave their homes in the morning without water and find their schools in the same desperate situation. They have to find water themselves.”

Conradie said that a year ago the Nqweba was at 1% capacity and people complained about the odour and colour of the water. She said the bed of the dam was filled with dying dish.

The municipality pumped borehole water but the pressure was too low to reach all the residential areas and the taps of thousands of people ran dry.

On 1 October Gift of Givers arrived with water trucks. It also drilled nine boreholes in Graaff-Reinet. “We drilled another borehole at the Midland hospital where the situation was dire. At present we are providing water to some clinics, schools and ordinary people,” said Conradie.

She accused the municipality of failing to secure the Nqweba dam, resulting in vandals stealing its infrastructure. “Even if the dam is 100% full, it will lose lots of water through vandalism of its pumps and pipes. The municipality should come on board and fix the equipment. This is making residents angry and frustrated.”

Abader said there was 24-hour security at the dam, but there had been vandalism of the pumps. “Unfortunately, just recently, the security on site was assaulted and robbed.” Vandals then damaged the pumps.

This article was corrected to reflect that the current water supply is 4.8 not 2.9 megalitres.