Some protesters are demanding registration for all students, regardless of whether or not they have paid fees 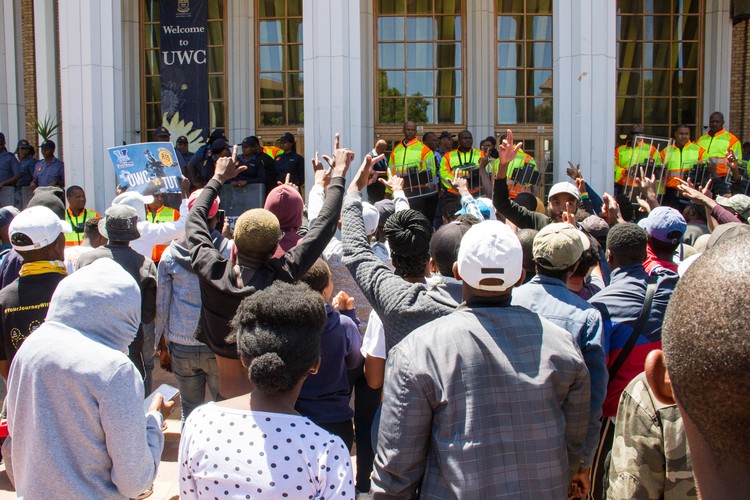 Over 200 University of the Western Cape students protested, demanding that classes remain shut until everyone is registered and accommodated. Photo: Ashraf Hendricks

By Liezl Human and Ashraf Hendricks

Over 200 students gathered outside the Main Hall at the University of the Western Cape (UWC) on Wednesday and sang protest songs, while calling for students to be allowed to register and get accommodation.

One student held a placard saying: “We want registration and accommodation. They are giving us POLICE #UWCSHUTDOWN!”. Campus security guards, holding riot shields, prevented students from entering the Main Hall. SAPS officers, riot police and a number of police vehicles increased throughout the day. Security eventually used red tape to cordon off the hall.

The university has suspended classes for the rest of the academic week.

Various student organisations, such as the Student Representative Council (SRC), DASO-UWC, the EFF Student Command, and SASCO-UWC, have been demanding since Monday that UWC postpone classes until all students are registered and have a place to live. Students have been sleeping in the student centre and in the TV rooms of residences.

Mandla Motyawa, the Deputy Chairperson of the EFF Student Command, said that there were still many students not registered due to not being able to pay their fees. This is one of the primary demands that students have given to the university.

“All students should start on the same footing,” said Motyawa. “The accommodation issues are tied with the registration [process]. The students cannot stay in any student accommodation if they are not yet registered.”

“However, this can only happen on a case-by-case basis with discussions with our Student Credit Management office. There, students get individual assistance about their specific set of circumstances,” said Abarder.

Motyawa said that the university had failed to communicate with the students who were protesting, even though the students sent them their memorandum of demands.

“The only communication they’ve made is to suspend the academic program,” said Motyawa.

Abarder said: “The university has communicated with students, staff, parents and guardians via bulk SMS, email and social media.”

He also said that daily engagements between the Deputy Vice-Chancellor of Student Development and Support and the SRC have been ongoing.