SRC says there will be no classes until situation is resolved 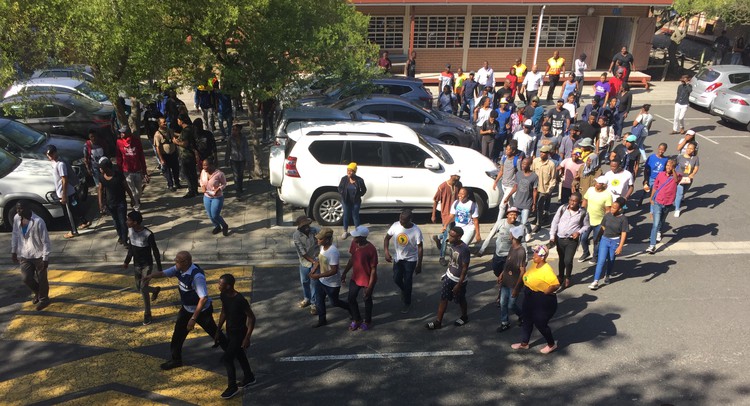 About 200 University of the Western Cape students protested about the institution’s lack of accommodation on Tuesday. Photo: Nompumelelo Mahlangu

By Liezl Human and Nompumelelo Mahlangu

University of the Western Cape (UWC) students are demanding the immediate postponement of the academic week until all UWC students are officially registered and accommodated.

The Student Representative Council (SRC) of UWC, DASO-UWC, and SASCO-UWC have been leading protests on campus since Monday. About 200 students were protesting on Tuesday.

The SRC has said there will be no classes until their demands are met.

According to SRC member Sinethemba Sankara Bizela, about 800 students still do not have accommodation. “The students are living everywhere: in the student centre, in TV rooms at residences, even in my office there are four students that I am housing.”

Bizela said issues with accommodation have been going on since last year, after the private student accommodation, South Point, announced that it would not be housing UWC students any longer.

“The students are demanding to be housed, because they are stranded,” said Bizela.

Zeke Wareley, DASO-UWC Deputy Chairperson, said that many students living in South Point were vacated after South Point signed an agreement with another institution.

“It was [the university’s] responsibility to ensure that they get accommodation,” said Wareley. “They were promised that they could move in by this month, but now they’re being told they can only move in within two to three weeks time.”

Wareley also said: “When the students tried to block the main entrances on campus, the head of security apparently said that if they are not registered, then they should be arrested.”

The SRC Facebook page makes a similar claim about head of security Abraham Samaai, claiming he said: “If they are not registered students, arrest them for trespassing.”

Samaai, however, said that he only told the protestors that they must follow the correct protocol and that it is the SRC’s duty to address the university management. “I didn’t say that they must leave the campus,” Samaai said. “This is a public place. They have a right to come here.”

The SRC said in a statement on 3 February that, at the time, the registration number stood at 17,000, which means that around 7,500 students were not yet registered.

In an open letter to the UWC Executive Management, released the same day, the SRC said: “It cannot be business as usual whilst our students are being denied access to education and whilst our students are without accommodation. We firmly believe it is in the best interest of the students to start the academic year on 10 February 2020. This will allow for enough time to address all issues we are currently faced with.”