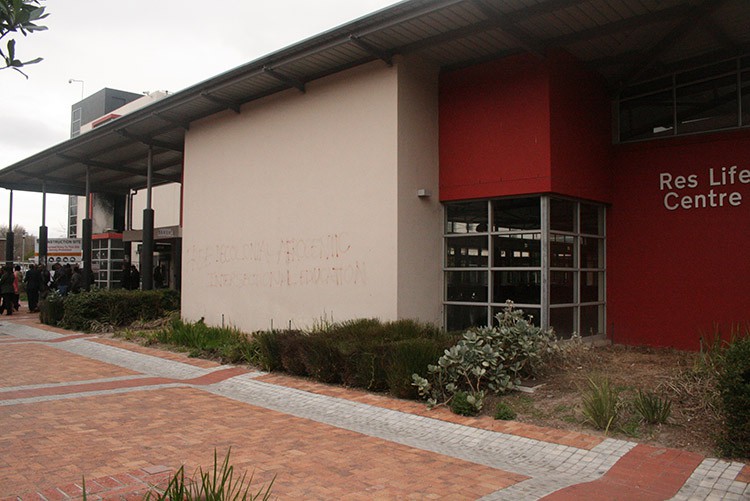 UWC’s Res Life building was burnt in 2015 and again in 2016. It has since been fixed, but there are still signs of damage inside. Photo: Sune Payne

By Sune Payne and Moira Levy

The University of the Western Cape (UWC) is negotiating with the City of Cape Town and the provincial government to acquire nearby land to build more residences. But even if building were to start immediately, the university management does not see there being enough accommodation for its students anytime soon.

Addressing the Portfolio Committee on Higher Education and Training, UWC Rector Tyrone Pretorius said: “Every year demands for residence space exceeds the number of residences available.” He said UWC currently accommodates 2,510 students in campus residences with an additional 792 students renting accommodation managed by the university. Another 214 students have private accommodation in the nearby Belhar and Bellville areas.

What then becomes of those students who fall outside these figures? Pretorius said the university has 22,000 registered students, yet only 3,302 out-of-town students are known to have accommodation.

“Many of the students we register have no financial means to find accommodation even though students make arrangements with landlords in the immediate vicinity,” said Pretorius.

He explained: “Some students do not qualify for residences and some of them do not live in conditions that are conducive for studying at home. The problem is a socio-economic matter as the university does not attract students who could afford residences closer to campus.” The drastic shortage of accommodation was not the only issue that the university raised with the Committee. Safety of their students was another concern.

Surrounding neighbourhoods are high-crime areas and the Committee was told that students who are not living on campus often become victims of crime. It heard that one of the buildings that was used to house students belonged to a drug lord in Belhar.

The Committee was told that the City of Cape Town has acquired land on the other side of the railway line which it intends to use for building low-cost housing. “This will further compromise the safety of our students,” Pretorius said.

The oversight visit by the Portfolio Committee on Higher Education and Training aimed to find out more about the challenges that led to last year’s violent student Fees Must Fall protests, and the lack not only of accommodation, which emerged as one of the key challenges, but the concern that some students did not have money for food.

During the protests, the Res Life Centre building was torched. SRC chairperson, Nolukhulo Mabharwana, told GroundUp: “[Management] didn’t come back with the answers about what they were going to do with the demands and when. Students understood some of those demands just needed time. [But] they didn’t come back and that’s when the violence started and the building got burnt.”

She pointed out bullet holes in the window which resulted from clashes between students and police.

The SRC also addressed the parliamentary committee about the concerns of students, saying students in private accommodation face problems with safety and crime which hinders their ability to study.

Welcoming the committee oversight visit, Professor Pamela Dube, Vice Rector for Student Affairs, asked: “How will it influence the budget on Higher Education and Training and the discussions around it?” Dube said she believed that if Members of Parliament had a better grasp of students lived experiences, they would have a more “productive understanding” of the issues students face.

The parliamentary Committee then went on to visit the Wynberg offices of the National Student Financial Aid Scheme (NSFAS). Former finance minister Pravin Gordhan announced in this year’s Budget Speech that Treasury would provide R93 billion in transfers to universities over the next three years and NSFAS would receive R41 billion over the same period.

Committee members were able to listen in to telephone conversations between NSFAS call centre operators and students. Applications for 2018 funding from NSFAS had already opened and between 1 and 10 August NSFAS had already received 3,906 online applications.

According to Lerato Nage, Acting NSFAS Executive Officer, the new centralised funding model makes it easier to complete the application process. It now takes an average of five minutes to complete an online application.

Committee chairperson, Connie September, said the committee was clearer about the challenges: “We have a common vision of where we want to be as an institution. The Committee appreciates the efforts by the university management to try and improve the student housing situation.”

She encouraged the university to talk with other relevant departments like Human Settlements. “The emphasis should be on collaborative effort. For example, you should engage the Sector Education and Training Authority on Built Environment on the new building projects the university is envisaging. Such a scenario will bring down the costs,” she said.