“Urine streams down the taxi rank” 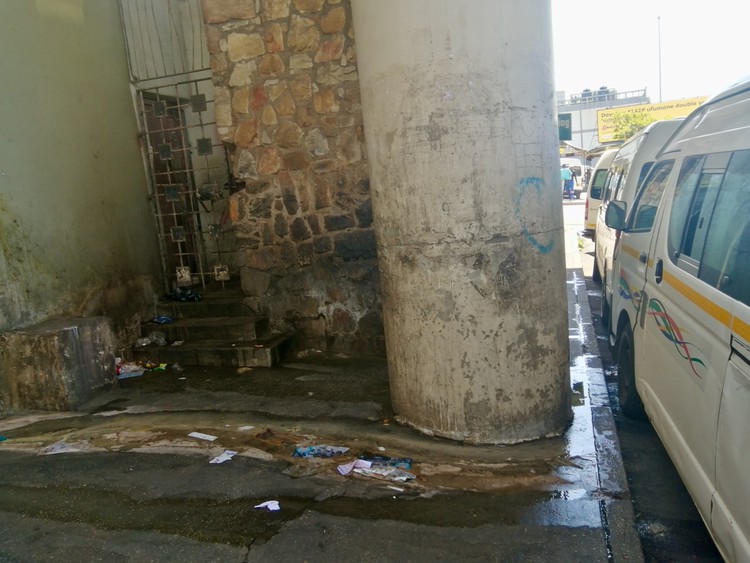 Commuters, taxi operators and hawkers say they have had to contend with filthy, leaking public toilets at Port Elizabeth’s Govan Mbeki taxi rank for the past three months. Commuters have to step over rivulets of urine to catch their taxis. People needing to relieve themselves have started to do so in public because the toilets are so revolting.

Commuter Xoliswa Pendu said, “Men pee on the wall and urine streams down the taxi rank … This must come to an end. The municipality must fix these toilets now.”

“Sometimes our commuters, especially women, ask our drivers to cover them [with their jackets] when they want to pee [next to the taxi] … Some don’t even ask for cover they just relieve themselves,” he said.

“Women’s dignity has been dragged into the mud as we are forced to pee in public,” said Nompumelelo Ndumisa, a hawker at the rank. She said, “Commuters don’t want to buy my fast food anymore, ever since these toilets were closed.”

A taxi washer, Andile Mpengesi, said, “I always wash urine from the wheels of the taxis … There is no way to avoid it because the toilets are next to the taxi rank. Some people even vomit,” he said.

Nelson Mandela Bay mayoral spokesperson George Geleba said, “We are aware of the recent underground water burst resulting in closure of the toilets at corner of Govan Mbeki and Russell Road affecting the Govan Mbeki taxi rank … We are working around the clock to locate the underground burst to restore water.”