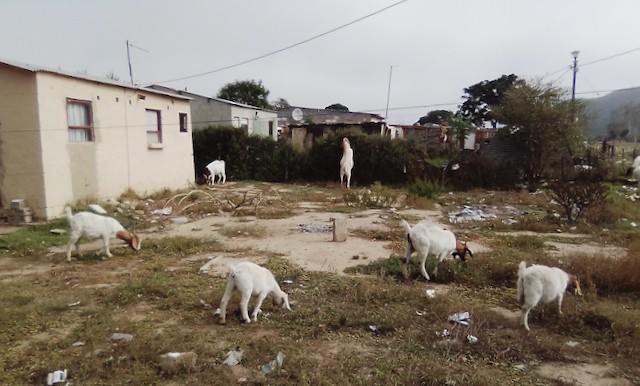 Goats grazing in the yards of houses in Colchester. Photo: Joseph Chirume.

Livestock farmers in Colchester have resorted to grazing their cattle on the verges of the N2 freeway and also along the banks of the Sundays River.

They used to graze their animals on two plots of land, but one of these has been occupied by backyarders and the second plot has been converted into a game reserve by its owner.

Colchester is a small town 40 kilometres from Gqeberha. It has no industry and its residents depend on farm work in the area, fishing in the river, and a handful of bed and breakfast establishments. Some have jobs at the nearby Addo National Elephant Park.

A handful of families depend on raising cattle and goats.

Willie Nqunda has 20 cattle and 31 goats, but he says the past two years, since the land occupation, have been a struggle to find grazing land. He herds the animals himself and he fears that further land occupation will cut off the path he currently uses to access the N2 and the river.

He said more than one Nelson Mandela Bay mayor had promised to find land for them, but nothing ever materialised.

“I am not employed and cattle raising is the only source of income that brings food to my table. We are stuck in this area and we are really desperate to feed our animals,” said Nqunda.

Boyce Peter said he has lost two of his 11 head of cattle due to a shortage of pasture. He is buying extra nutrients and feed for his herd, but struggling to afford it.

Peter said the Covid-19 pandemic has made things worse. “We couldn’t sell our animals as gatherings were banned. We spent a lot on stock feeds.”

Peter also said, “There has been long standing promises by [municipal] officials that they would buy one of the plots for commonage, but it has proved to be empty promises.”

Nelson Mandela Bay Municipality spokesperson Kupido Baron said urban agriculture is a problem for the metro. The municipality is busy with a livestock audit that involves physically counting the cattle in the municipal area.

Baron said the municipality is working with the provincial government to identify open land and to compile a list of all urban farmers in the municipality. He said possible land had been identified in Kariega. The municipality is assessing “the physical, technical, ecological as well as infrastructural” needs for a “massive relocation of stock to the area”, said Baron.