Taxi fare is too high for some to afford 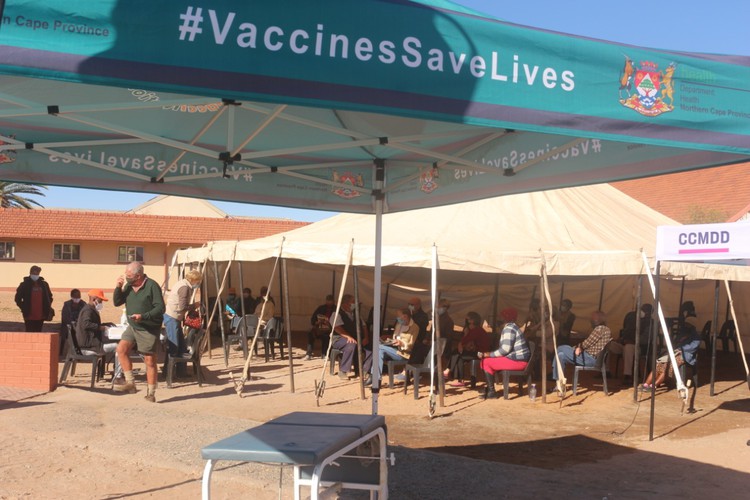 Upington residents older than 60 register at the table before they go inside the vaccination room at Upington clinic. Photo: Selby Nomnganga

Elderly residents of Upington townships are battling to get to the only clinic offering Covid-19 vaccinations, with one saying he could not afford the taxi fare.

Joseph Fani came from Paballelo to the old Gordonia hospital, now the Upington clinic, for his vaccine. He had waited about two hours to be vaccinated, he told GroundUp.

“The service is fantastic,” said Dawid Willemse, who drove himself to the clinic from his home in Extension. He had registered but had not been given a date, and when he saw people queueing he joined the queue. “They are professional,” said Willemse.

But others battled to get there. Velile Jombile from Paballelo got a call saying he should get his jab at the Upington clinic, but decided not to go because of the cost. But he wants to get the vaccination, he says, and is hoping to find a solution.

From Paballelo to the clinic, on the outskirts of Upington, is about 7.5 kilometres and the return taxi trip is R60, in two taxis.

When GroundUp visited the clinic, a 26-year-old who was accompanying her grandmother, and who did not want her name used, said it had cost them R120 to get from their home in Rosedale to the clinic. The nearest clinic, the Sarah Strauss clinic in Rosedale, is not offering vaccinations.

Two Fridays ago, 28 May, vaccinations were done at the Thembelihle Service Centre for the elderly, at the request of the manager Mlungisi Mbondezi. “This was a special request”, said Mbondezi. He said about 70 of the 130 people served by the centre had been vaccinated. “Others got cold feet”, and had not come for their jabs. They will have to go on their own when they change their minds, he says. The second Pfizer jab is scheduled for 9 July at the centre he says.

Asked why more sites had not been opened for vaccinations, media liaison officer for the Northern Cape health department Lebogang Majaha did not respond.