Building burnt at UKZN as protests against student debt escalate 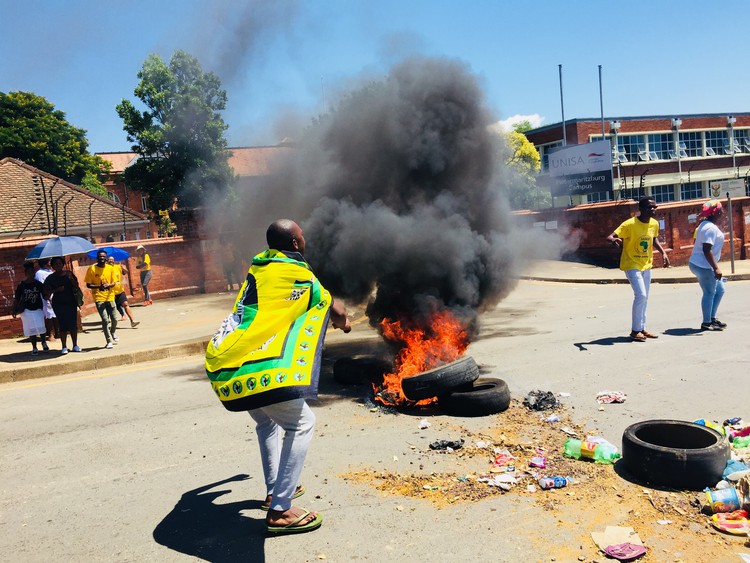 Protesters blocked a road at the UNISA campus in Pietermaritburg earlier this week. Photo: Nompendulo Ngubane

The South African Union of Students (SAUS) has called for a shutdown of all universities following a breakdown in talks with the Department of Higher Education and Training late last year.

The talks were attempting to address demands raised by SAUS and Student Representative Council (SRC) representatives from across the country.

SAUS submitted a list of demands to the department on 16 January. These included: wiping out of all student debt, re-opening of National Student Financial Aid Scheme (NSFAS) applications, free registration for vulnerable, and poor students, and improvement of dilapidated student accommodation and infrastructure.

According to SAUS, it has held talks at 24 universities and numerous student representative bodies have agreed to join the proposed shutdown.

His statement suggests that NSFAS may be looking into erasing a substantial amount of historic student debt. It has “processed” about R450 million so far, wrote the minister. But he also said that public funds for universities are “constrained” and “there is no possibility for debts of students who are not NSFAS beneficiaries” to be eradicated.

Nzimande said that all students under NSFAS who are carrying debt from 2019 can sign an acknowledgement of debt form in order to register in 2020 at the university they are returning to.

According to a UKZN statement, in the early hours of Tuesday morning, protesting students set alight the Security Control Centre building on the Westville campus.

NWU spokesperson Louis Jacobs confirmed that the institution has had to close its Mafikeng campus since Monday due to students protesting in solidarity with SAUS’s demands.

In a statement, the Department of Higher Education and Training “strongly condemned the violent protests… which led to damages at two university campuses”.

SAUS spokesperson Thabo Shingange said that the organisation “condemns any violence during these protests”. He distanced the organisation “from any acts of criminality that seek to undermine our genuine cause”. But he said the union condemned the recent use of private security guards at universities. He also reported that many SRC members involved in the protests are being threatened with suspension.

“While some universities are already protesting, we believe that if we all discuss these issues in good faith we can find a way forward before the other universities … join the shutdown,” said Shingange.