Universities on knife-edge as protests continue 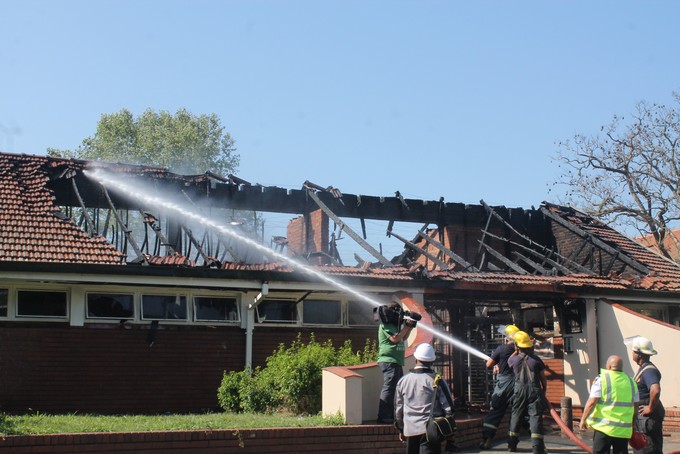 Negotiations were deadlocked at several universities today as students vowed to continue their fees protests and university management warned of severe consequences unless classes resumed soon.

The protests at UKZN and other universities have been fuelled by the announcement made by Minister for Higher Education Blade Nzimande of an 8% cap on university fee increases next year, with subsidies for households earning less than R600,000 a year. Two days ago the William O’ Brien residence on the Pietermaritzburg campus was set alight.

Reverend Philani Dlamini from the Methodist Church of South Africa said the religious leaders were opposed to the use of violence against the students by police. Students had a right to fight for what they believed in, he said.

Twelve students arrested during protests are to appear in court tomorrow.

Spokesperson for UKZN Lesiba Seshoka said the university management had engaged with students on several occasions.

Seshoka said no decision had yet been made on fees for 2017 and the university council would finalise this in October. “It is imperative that we continue with the Academic Programme, as any further loss of time will start to impact on our ability to successfully complete the academic year,” he said.

Fees must fall activist Xola Mehlomakulu told GroundUp that students would continue with the “struggle” until their voices were heard. He said they wanted to consolidate the protest into a community movement and had invited parents to come to the university on Friday.

“We are not hooligans as we have been portrayed by many, but we are people with beliefs. We called on the religious leaders so that the police would stop shooting at us. Police have been chasing us around and we are saying that it’s enough. We know that when they see religious leaders they won’t dare shoot at us. But whether they shoot us or not we will continue with the fight for free education,” said Mehlomakulu.

At Durban University of Technology (DUT) one student has been arrested after students threw rocks at police and journalists outside the ML Sultan campus during a fees protest.

The demonstrations at DUT began on Monday - with students demanding answers about the scrapping of student debt and aid for 4,000 students who they claim qualify for National Student Financial Aid Scheme (NSFAS) money but have not received funding.

Student Representatives’ Council (SRC) member Khulekani Dlomo said all students who could not afford the fees should get the full NSFAS package. “Now Blade Nzimande wants to increase fees when we can barely afford books. We are here today just as yesterday to fight for change.”

DUT Spokesperson Alan Khan said that classes had been suspended for the safety of students and staff who were not protesting. He said the university hoped to find a solution at a meeting today with the SRC, the Department of Higher Education and Training, and NSFAS.

With only just a few weeks until final exams, some students fear they might not be able to complete their 2016 studies. Accounting student Nontando Zulu said, “I don’t disagree with these protests, in the end they are for a good cause, but there are a few weeks before we write exams. My year’s work will be in vain if I don’t get to write and be able to find a job next year, which is ultimately all that we all want.”

Horticulture student Bhekani Mhlongo said the protesters were students who did not want to write exams. “Anybody who has studied would not be doing this. When you are worried about your studies and your future, you don’t burn it away. They’re burning tyres and threatening students who want to study in peace. I just think they want out of writing the finals.”

Both the Alice and the East London campuses of the University of Fort Hare were closed in spite of warnings from management that there would be consequences if protesting students did not return to class today.

Students said they had been prevented today from holding a meeting on the East London campus to discuss the way forward. SRC member Sonwabise Mamnkeli said they had arrived at the campus at 8am but had been blocked by police. He said the SRC had urged students to return to their residences, fearing a confrontation with police.

Mamnkeli said the students would continue with the stayaway until there was a commitment that there would be no increase in fees for any student in 2017.

Students have been sent emails by university management urging them to return to class at 8am today or to leave the university and return to their homes. Vice Chancellor Mvuyo Tom said there had been no academic activity on the Alice campus since 12 September and none on the East London campus since 20 September. He said “a certain group of students, who project themselves as leaders of each and every student of the University” had “arrogated to themselves the right to dictate to law abiding students and to the University’s employees”.

Tom called on students to return to classes today.

But students on the Alice campus have vowed to continue the stayaway until the university’s security company has been changed.

SRC member Thandikhaya Mathokazi said management should not threaten students. He said management was aware of the problem with the security company but had done nothing to solve it.

Lizo Phithi, stakeholders relations manager at Fort Hare, said academic time had been lost. “Students have to stop this and report back to classes or all this year would have been a waste of time,” he said.

Classes were continuing today at all Walter Sisulu University campuses.

At Nelson Mandela Metropolitan University in Port Elizabeth, classes were still suspended today in spite of pleas from university management to students to return to class. In a memo earlier this week in response to student demands management said though students had the right to protest peacefully, those who did not want to take part in protests had the right to continue with their studies.

The university warned that a continued shut down might lead to the academic year being extended into 2017, the postponement of summer graduation and the possibility that some final-year students could not graduate in 2017. A continued shutdown would also “severely” compromise university operations such as the processing of applications for admission next year and of student funding.

Management said student grievances could be addressed while teaching continued.

Meanwhile, a group of parents led by Port Elizabeth lawyer Terry Price is considering asking the court to force the university to open its doors to students who do not want to protest.

Price, who said he was “acting as a parent not as a lawyer”, said the group had sent a memo today to university management. “We said please open the university,let those students who want to write examinations do so.”

Efforts to get comments from student leaders were unsuccessful.

In a poll for UCT’s science faculty staff and students, the vast majority of respondents (in the region of 80%) voted for the university to reopen. About 35% of people in the faculty answered the poll.

At a press conference this morning, UCT vice-chancellor Max Price said that private security will be brought onto campus on Monday if protests continue. He warned that the academic year would spill over till March if it is impossible to open the campus soon.

Gerda Kruger, head of UCT’s communication department, wrote a short while ago that yesterday, and again this morning protesters behaved “in an unlawful, intolerant and unacceptable manner.” She said: “Groups of protesters have entered university work spaces and are forcing staff out of their offices. Their actions are intimidating and traumatising staff. Jammie Shuttle operations have come to a standstill as protesters have been threatening drivers and stealing the keys. This leaves passengers stranded and traumatised. Traffic booms are being interfered with and entrances to various parts of campus are continually being blocked.”

He said no announcement had been made yet about fee increases in 2017. “Maybe it will be announced next week. If the fees go up, I can’t predict what is going to happen.”

At the University of the Western Cape, where SRC elections started this week, classes were continuing as usual.

Leaders of the “UWC Fees Will Fall” movement said they had handed over a memorandum of demands to university management on Wednesday 21 September.

Some of the demands in the memorandum include “free quality black-centred decolonised education”, the scrapping of student debt and registration fees, free data, and the insourcing of university workers. Students also want all charges against the 23 students who were suspended last year to be dropped.

Acting SRC president Lukhanyiso Matebese said she was not happy with the announcement last week on fees by Nzimande: “We want free education in our lifetime.” She said the first step would be free education for those who could not afford to pay fees. “Then the others can meet halfway. The main goal is free education for all. It’s a process,” said Matebese.