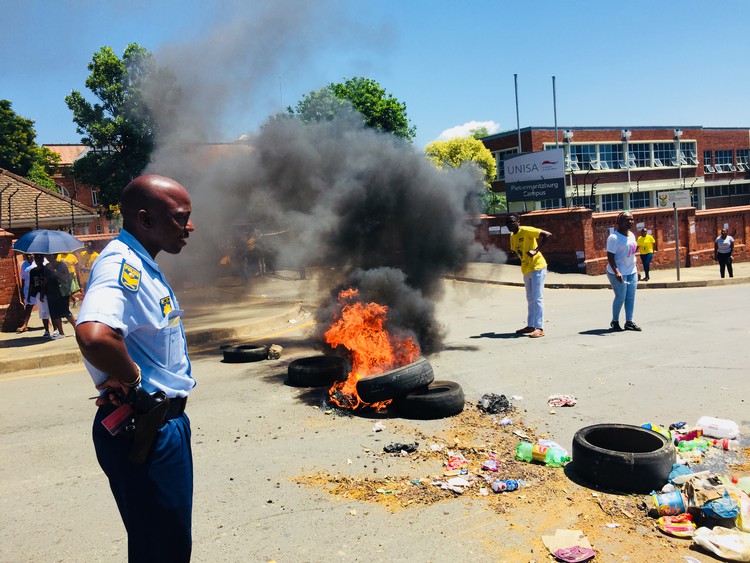 “We are saying to National Student Financial Aid Scheme (NSFAS) and UNISA management: Enough is enough! We want justice,” said the secretary of UNISA’s Student Representative Council in KwaZulu-Natal, Andile Ndaba. He was one of dozens of students from UNISA’s Pietermaritzburg campus who blockaded Langalibalele Road with burning tyres and bags full of garbage.

The institution locked its gates but allowed students who were writing exams to enter.

The protesting students are upset that NSFAS has excluded many UNISA students from funding because of poor performance. Ndaba said that it isn’t clear what NSFAS means by “poor performance”. “Students were told that a 50% pass rate would allow them to receive the financial aid. We have students who got over 50% pass rate but they have been excluded from NSFAS,” he said.

He said the disputes had caused delays in the registration process. “We have new students who are here to register for the first time. There are matriculants who have not registered. Their registration has not been finalised by NSFAS. … Every year it’s the same issue. Students have suffered enough. We are demanding that the Department of Higher Education takes us seriously. UNISA students must be treated the same as students in other universities in terms of allowances as well as traveling allowances.”’

Nonhle Vidima, a student, said: “I don’t know why I have been excluded.” She said she got 50%. (We’ve been unable to confirm this at time of publication.)

GroundUp asked NSFAS to specifically address the claim that students who say they got over 50% are being excluded. In response we received a speech delivered by Minister of Higher Education Blade Nzimande which doesn’t appear to address this issue.

“The student demands have been brought to the attention of the management seeking an amicable solution to such challenges,” said Seme.

Some UNISA staff are also currently on strike over salaries and so no services are available at the KZN UNISA offices. But, said Seme, the university is not closed.