Unions threaten total shutdown if no response in five days

NEHAWU is demanding a 7% increase 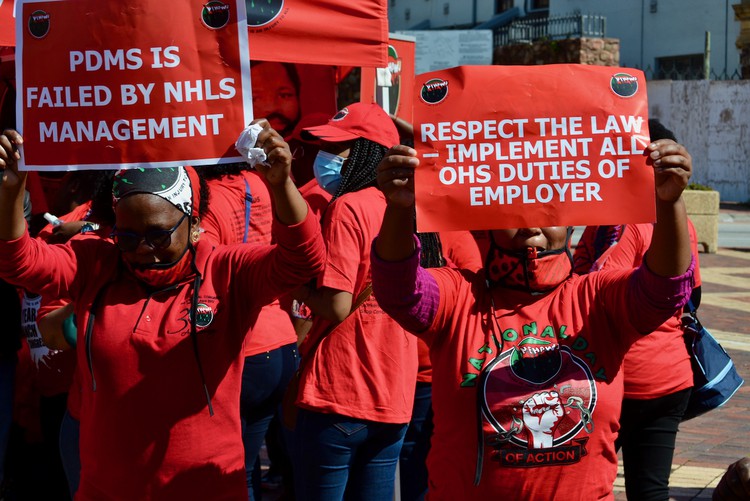 The National Education, Health and Allied Workers’ Union (NEHAWU) embarked on a national day of action across the country on Thursday afternoon.

NEHAWU, supported by its alliance partners, is demanding a salary increase of 7% from government. It has given an ultimatum of five days, failing which labour will be withdrawn in all sectors across the country on 10 September.

Memorandums were handed over to the premiers of the nine provinces, and a memo handed to the office of the President.

Demands also include filling vacancies at all hospitals and clinics, provision of personal protective equipment (PPE), and danger allowances.

In Port Elizabeth, the partners protested outside City Hall, wearing T-shirts and masks, whilst sanitisers were given to participants.

Regional secretary Busiswa Stokwe spoke under a gazebo as members sang around her, “Umoya wam uyavuma” (My spirit is alive).

Stokwe said, “The government we put to power has now showed us a middle finger. They have waged war on us as the frontline workers by not providing what we demand … They refused to give all PPE to all our workers, saying they were focusing only on Doctors and Nurses. What about the porters who took patients from ambulance via the wheelchairs to the hospitals? We said they must provide PPE to all of us because a contact is a contact.”