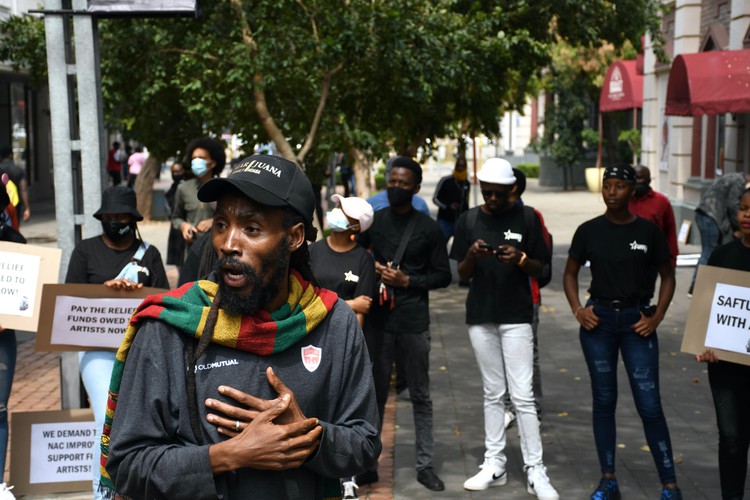 Thapelo Khunou, an artist and a lecturer at Gauteng Community College and member of College Workers Union of South Africa, addresses the protest. Photo: Julia Evans

About 50 people gathered outside the National Arts Council offices in Newtown, Johannesburg on Wednesday, as unions from the South African Federation of Trade Unions (SAFTU) joined artists in their struggle to access funds.

Performers have been staging sit-ins at the council offices in Johannesburg since 3 March. They are demanding answers over the management of Covid-19 relief funds and the Presidential Employment Stimulus Programme (PESP).

The protesters planned to continue the sit-in with a night vigil until 10pm.

They have demanded that Minister of Arts and Culture Nathi Mthethwa resign, saying he has not communicated adequately over where PESP funding has gone. They want the list of recipients to be made public.

According to the latest statement released by the council, out of the R300 million that was allocated to the PESP, R85 million has been distributed to 639 beneficiaries as of Tuesday 30 March.

SAFTU spokesperson Trevor Shaku told the protesters: “SAFTU came here today to pledge solidarity to you, the artists, because we understand that your struggle belongs to the working class.”

Thapelo Khunou, an artist and member of the College Workers Union of South Africa (an affiliate of SAFTU), said, “Nathi Mthethwa has failed the art industry for years. We need radical transformation in the arts. We need artists to lead the struggle.”

Artist and activist Savage Tau told GroundUp that the protesters have had three virtual meetings and one in-person meeting with the council. “What they’re doing now is sending out emails, saying people don’t qualify to get the funding,” said Tau.