Union warns PE coalition: “If our demands keep falling on deaf ears, someone will fall” 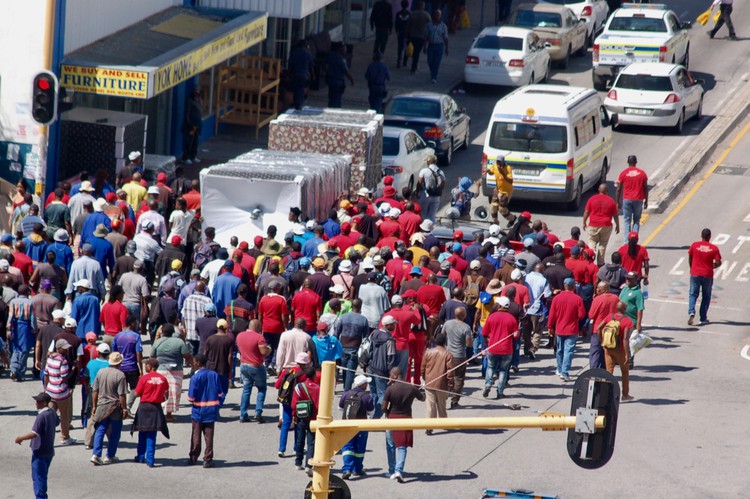 Hundreds of South African Municipal Workers Union (SAMWU) members marched to City Hall in Port Elizabeth on Wednesday afternoon. They gave the municipality seven days to respond to their demands.

On 8 March, SAMWU held its general meeting outside City Hall but its demands were not heard, said Gobodo.

“We are here to say enough is enough with boardroom negotiations … The DA [ousted in August 2018] ran the municipality and we told them they will fall if they don’t care … We don’t mind who rules now … All we are saying is if our demands keep falling on deaf ears, someone will fall down.”

Workers sang “Tambo ndinik’isibham” (Tambo give me a gun) and “Thina silwela amalungelo” (We are fighting for our rights).

The march was supported by COSATU and the Young Communist League.

The petition includes demands for a scarce skills allowance for certain workers, a transport allowance for those who use their own vehicles, overtime allowances, and permanent jobs for contracted workers. The union wants these implemented by 25 April.

On behalf of the municipality Thembekile Mgwanza accepted the memorandum of demands. He told the crowd his position is “Petitions Manager”.

Workers who braved the scorching sun to march said they missed Nomvula Hadi, SAMWU chairperson in Nelson Mandela Bay. She is known as one of the strongest leaders in a union dominated by men.

On Wednesday she confirmed that she has resigned. “But I am still a member of the organisation, and will remain as a member for ever,” Hadi told GroundUp.

A worker said, “SAMWU is going to be weak without her.”