Woman who can’t evict people from her home faces eviction

Double-edge of high bar for eviction 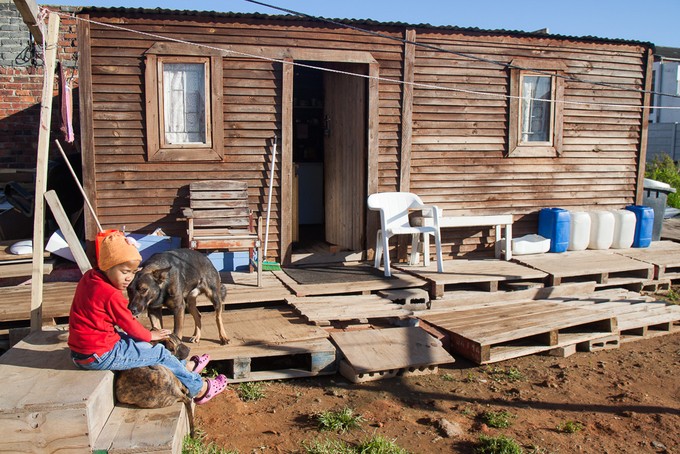 Cheryl Jacobs lives in Woodstock with her husband and young granddaughter. They are facing eviction from the tiny shack they have been living in for the past two and a half years.

A private developer wants to build high end apartments on the land. The developer has taken three years to secure the eviction of businesses on the property, set to proceed at end of July.

Jacobs moved onto the land knowing she will be eventually evicted. But Jacobs is in an unusual predicament. She has a house in Lentegeur, but she can’t stay there because she can’t evict the occupiers of her home – the ex-wife and family of Jacobs’ husband.

Jacobs has the title deed to the property, as well as documentation of the divorce. But she can’t afford the cost of eviction proceedings.

The South African Constitution explicitly bans the kind of arbitrary evictions which the apartheid regime used to enforce its racist spatial planning policies. The Prevention of Illegal Eviction from and Unlawful Occupation of Land Act of 1998 (PIE) requires property owners to go through the court system and demonstrate that the eviction is just and equitable. The act prevents local government from evicting people from state land without a court order, and the Constitutional Court has extended this to all forms of public and private property ownership.

In City of Johannesburg v Blue Moonlight Properties, the court held that a private property owner who buys land knowing that it is unlawfully occupied must be patient while the municipality works toward providing emergency accommodation for the occupiers who are to be evicted.

This level of balancing of property ownership with constitutional rights to accessible housing is possibly unique to South Africa. Landowners, even private ones, must demonstrate to the court that they have taken proactive steps to help residents find affordable housing and prove that the eviction is ‘just and equitable’.

In the Blue Moonlight ruling, the court specifically noted that it was taking into account the fact that the private landowner was a large developer, only pursuing the evictions in order to quickly redevelop the land. It does not appear that any notable court case has arisen from a situation such as Jacobs’, where it may be impossible for a homeowner to ensure the eviction is ‘just and equitable’.

Even in the clearest cases, evictions can be expected to cost the property owner between R6,000 and R8,000 and may take eight weeks to be decided by a court. In addition, there is a one-month grace period required after the eviction order is granted. If the eviction is opposed, the costs escalate significantly as well as the time it takes to evict the occupier.

Jacobs’ situation brings up a possible gap in the current approach to evictions. In most common-law countries, if Jacobs as the property owner presented the title deed to a police officer, it would be enough for the officer to carry out an eviction. However, in South Africa, not only does Jacobs need to produce the title deed, she needs to apply for a court hearing and show that the eviction is just and equitable. All those burdens require documentation, time, and resources that Jacobs says she simply does not have.

Municipalities and large private developers generally have the information and resources required to argue their case successfully, as in the case of the property owner evicting Jacobs.

This high burden of eviction proceedings is leading to the consolidation of land by private developers and corporations. A lower to middle class property owner in a neighbourhood like Woodstock, aware that he or she cannot afford eviction proceedings, may find it much more profitable to sell his property to the only people willing to buy illegally occupied land or buildings: a private developer.

GroundUp has previously reported on practices by private developers to cut off basic services and maintenance to force residents to move without going through the eviction process. In some cases, developers offer lucrative deals to property owners and landlords then completely avoid contact with the residents for a few months, in order to argue that the occupiers never paid their rent and should be evicted.

The high bar for eviction cases and increased court scrutiny has led municipalities to develop alternatives to remove land occupiers. Municipalities exploit legal loopholes that effectively clear the land. In Cape Town, GroundUp has reported on how the City uses simpler court procedures, such as interdicts aimed at stopping the “action of land invasion”.

On the provincial level, legislation has set up Rental Housing Tribunals for free mediation and hearings. However, these tribunals only apply to an established rental arrangement (between landlords and tenants) and not to illegal occupation. According to Western Cape Rental Housing Tribunal manager, Roy Stewart, if a rental relationship cannot be proved, or if the landowner still wants to evict, they will have to approach the courts. He noted, “Landowners often resort to illegal tactics to avoid the costly [and timeous] process of approaching the courts.”

Since 2005, the national Department of Human Settlements has released legislation to amend the PIE act. The most notable bill, in 2008, was meant to clarify aspects of the law, increase the ability of landlords to hold tenants to rental agreements, and simplify the process of obtaining a court order. The national department stated that the legislation was meant to counteract court rulings that it felt led to bad policy and misapplications of current law.

However, the Human Settlements Committee rejected the bill, citing concerns that it did not satisfactorily deal with farm workers and was incompatible with other legislation. While the national department still has a draft bill from 2006 on its website, no further legislation has been introduced in parliament.

In the absence of any such changes to the process, Jacobs has little recourse. For the past few years, she has applied to the Legal Aid South Africa for help with her case, yet nothing has come from it. The fact that she is bringing the eviction case requires that she be able to prove that her husband’s ex-wife will not be homeless if evicted.

Jacobs says that the ex-wife has told her that she will fight the eviction if a case ever opens up. Without the ability to afford the legal fees, Jacobs and her family plan to continue living in shacks around Woodstock, uncertain if they will ever be able to move into the home they own.

Minor corrections were made to the text after publication. Legal Aid South Africa complained that we did not seek comment from it. In fact we did, but we received no response.