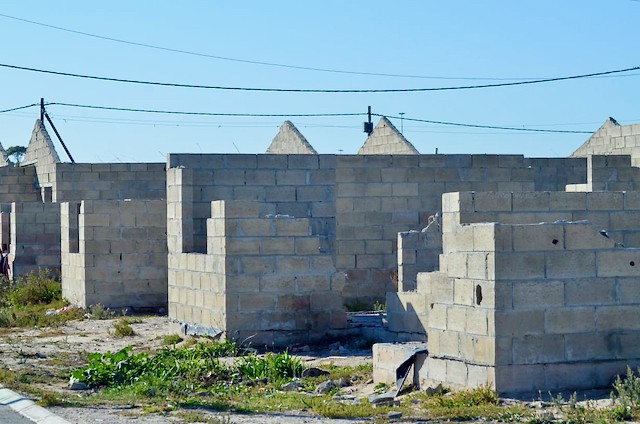 In 2004, the Western Cape government allocated about R6.5 million to build RDP houses at Mpetha Square informal settlement, Nyanga. The Masiphathisane Housing Project was for 135 beneficiaries, of which 40 were backyarders. But a dispute over who should benefit meant the houses were never occupied.

Some sites are only at foundation level. The houses were badly vandalised by 2012.

“These houses have been like this for 10 years if not more,” says Mpetha Square community leader Nosakhele Jolingwenya.

She said community leaders have received reports of people being raped in the unfinished houses. Some houses are marked with the names of known gangs, such as Vato and Italians. Resident say the houses are used as criminal and drug dens.

Jolingwenya said they have spent years negotiating with the department to fix the houses.

One of the houses is allocated to her. “Every day I pass it. Even when I’m standing next to my shack I can see it. And the sad part is to know what is happening inside it at night, but there’s nothing I can do,” she said. “If the department can add a roof I will move in immediately because I’m tired of living in this shack.”

She said the dispute about the beneficiary list was caused by a disagreement between the department, community leaders and disgruntled backyarders.

“When we were approved we were given house numbers and the planning is very clear on which house belongs to who. No one told us about the backyarders before until the houses were vandalised,” she said.

Resident Lindeka Rangana was also allocated a house, but it is only at foundation level. “Now there’s grass and sand. I don’t even know which slab was it,” she said.

She said in 2017 the department came back to repair houses but nothing much was done.

“Again last year there was a contractor to fix some of the houses but they did not finish … When we contacted the department they told us that they can’t send the contractor because of lockdown,” she said.

Martin said the department has set aside an additional R2.473 million to fix the vandalised units. It has currently fixed 24, of which five units will be occupied by backyarders.

Martin said the department is in the process of verifying the last 12 beneficiaries on the list and then a contractor will recommence work.