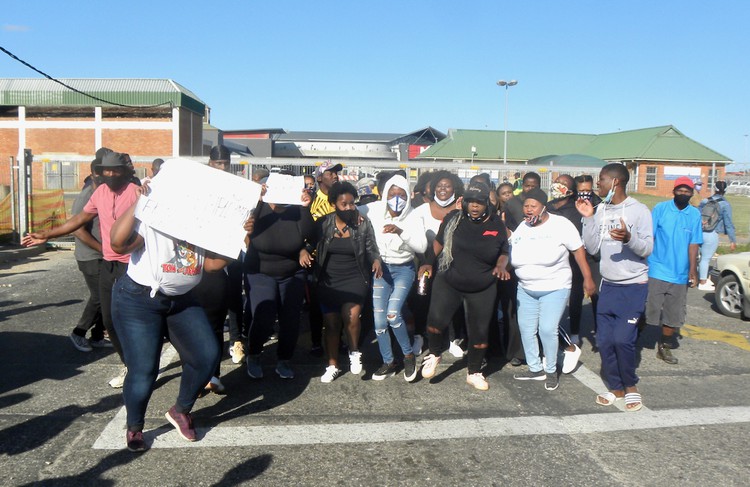 About 80 young men and women shut the main gate to the newly renovated Motherwell Shopping Centre in Port Elizabeth on Thursday morning. They are demanding jobs at the mall.

Shoppers and people coming to collect their Covid-19 UIF grants had to wait outside the gate until the protesters delivered a petition to mall management at 10am.

The protesters sang songs and jeered at construction workers still busy finishing renovations inside the mall. The mall has been extended and numerous new shops have opened.

Mfundo Gula said: “We are not here to vandalise any property but to show our anger. Local people did not get jobs when construction work was happening. Contractors brought in their workers. We tried to engage with them but it was fruitless. We now want to get jobs in these shops or we will close all shops at this mall.”

He said government allocated jobs for locals “whenever there is a project” and their ward councillor had promised them 30% of the jobs at the mall when it reopened.

“We are angry that we remain unemployed yet we have shops hiring people from outside our area,” said Gula.

Protest organiser Xolani Xaluva said: “To our surprise people from outside are being hired for manual jobs that can be done by the locals … The jobs offered in these shops are not technical ones that demand technical skills and a high level of education. They are simple jobs that anyone can do.”

He said they had petitioned the centre’s management and if they did not get a response soon, they will call together residents on Monday and shut the mall indefinitely.

Sipho Evans, legal and risk manager for Capital Land Asset Management, which manages Motherwell Shopping Centre for Community Property Company, said that with the assistance of a local ward councillor the protest was resolved and tenants resumed trade.

“Our most recent employment stats confirm that approximately 80% of the labour force at the shopping centre are from the local Motherwell community.”