Uncertain future for residents of old stables in Woodstock

Die Stalle to be developed as social housing 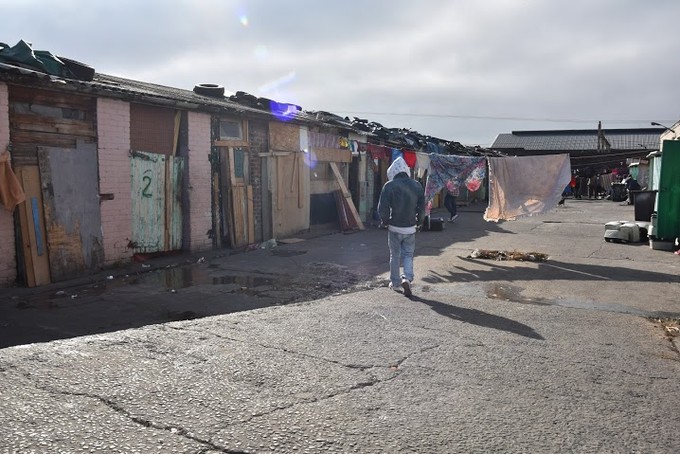 Residents of Die Stalle in Woodstock fear for their future because the site will be developed as social housing. Photo: Christine Hogg

People living in the old stables in Woodstock are worried about their future when the area is developed for social housing in line with the City of Cape Town’s plan for the Salt River Market site.

The informal settlement in 21 former horse stables and the adjacent Salt River Market are situated on City-owned land.

According to Councillor Benedicta van Minnen, Mayoral Committee Member for Human Settlements, the horses belonging to hawkers who used to bring produce to the Salt River Market in the 1940s and 1950s were kept in the stables. Residents remember horses being kept there until the 1990s or early 2000s.

The area is to be developed for social housing. But residents of the stables fear they will be overlooked.

Sharon Sollows, 55, has lived in Woodstock since she was 15 years old. She made a stable her home after the flat she stayed in close to the Woodstock Police station burned down about two years ago. In May this year five stables, including hers, were damaged in another fire and Sollows found herself without an ID, clothes, or money, without her medication for her arthritis and epilepsy - and without a place to sleep.

In emergencies such as shack fires, the City’s Disaster Risk Management Centre hands out food parcels and kits for residents to rebuild their dwellings. The residents of Die Stalle maintain that the Centre provided food parcels, but said the site was “condemned”.

Asked about this, van Minnen said the City had talked to those affected by the fire and offered alternative accommodation, “which they have refused”.

Sollows said she didn’t want to go to the “temporary resettlement area” at Blikkiesdorp, so she spent some nights in a toilet and some outside.

Nasra Davids, 35, has a two-year-old daughter and is expecting another baby. Her husband is in prison and cannot be let out on parole, because, she says, the authorities don’t recognise the stables as a valid parole address.

She has been living in one of the stables for two years after being on the streets, and fears that the settlement has been forgotten.

When growing up, she was sent to a home for girls because her mother didn’t have a place to stay. “My mum waited 30 years and she only got her house now. Look how old am I? ” she said.

There is access to water and there are temporary toilets and a security guard on the site of Die Stalle. But Davids says there are problems with intruders, including aggressive police officers, and difficulties cooking because it’s hard to find wood, especially when it’s raining. Many residents suffer from chronic illnesses, and survive on social grants and casual jobs.

But in spite of all the problems, residents feel safer here than on the street.

Van Minnen told GroundUp that the stables building was unfit for human habitation, but that there were no immediate plans to remove the residents. However, there were plans for a long-term project., she said.

She said the site could provide “ affordable rental accommodation on a sustainable basis” in Salt River.

The City was looking into a mixed-use development but no concrete proposals had been put forward yet, van Minnen said.

Social housing usually requires a regular income of at least R2,500 a month, and electricity, water and maintenance bills need to be covered on top of this. When asked if the current residents would be offered a place, and what would happen to them if they could not afford it, van Minnen replied: “The various options that could be followed have not been determined yet. The City would not wish to pre-empt any possible future developments in this regard.”