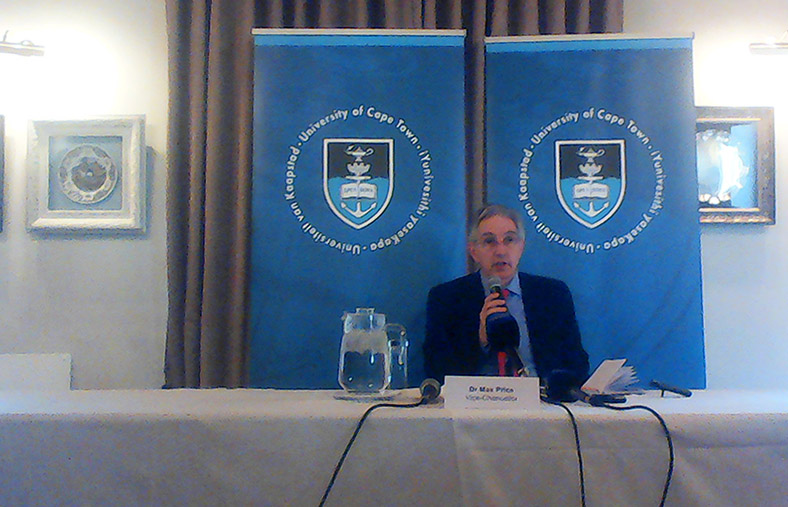 UCT vice-chancellor Max Price was allegedly assaulted by a protester this afternoon.

According to a statement from the university Price and two members of the executive were meeting with protesters outside Bremner building, the university’s administrative headquarters, this afternoon.

“After engaging with the group, Dr Price wished to leave as he was due at another meeting. He explained this to those around him. Unfortunately, some of the protesters encircled him and started pushing and pulling him. Dr Price attempted to walk away when he received two punches to the body. A colleague attempted to protect the Vice-Chancellor. [Police] stepped into the group to escort Dr Price away. Unfortunately, the scuffles and pushing escalated and police officers used stun grenades to disperse the group,” says the UCT statement.

The statement further says that after Price and the other executives were escorted into the building, the protesters left and disrupted a soccer match nearby.

“The behaviour by some of the protesters is utterly unacceptable and unlawful. In our view what happened to Dr Price constitutes assault. We recognise that not all protesters behave in this way,” said the statement.

Professor Deborah Posel, Price’s wife, told GroundUp that he was okay but shaken. “I am appalled,” she said.

Video footage of the discussions between Price and the protesters, which dealt with the arrest and bail of student leader Masixole Mlandu has been published by EWN. The footage shows a tense discussion, and police intervention. Precise details are hard to discern.