Meeting ends in acrimony between participant and vice-chancellor 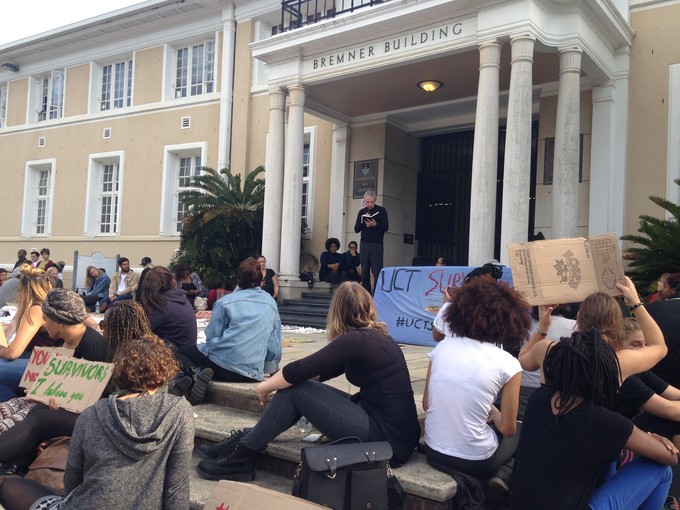 People with placards and white T-shirts lined the area outside the University of Cape Town’s Bremner Building. Statements on the placards included “#EndRapeCulture”, “UCT Fails Survivors” and “Council’s Silence = Complicity”.

A mattress lay in the area with a ripped sheet over it that read “UCT Survivors #UCTSpeaksBack”.

The group UCT Survivors led an event today, as part of a week of mobilisation to speak against what they say is a culture that allows sexual violence to continue. More than 100 protestors gathered for the open forum that addressed sexual violence at UCT and management’s alleged mishandling of the issue.

Vice-Chancellor Max Price attended the forum and was allowed to respond at the end.

The event began with Dela Gwala, a UCT graduate student and a representative for UCT Survivors, reading a statement by UCT Survivors. The statement questioned the effectiveness of UCT’s Discrimination and Harassment Office (DISCHO), the absence of available sexual harassment and sexual assault statistics, and the university’s failure to suspend perpetrators while they are under investigation. It also raised other issues.

Gwala also said that the creation of the Sexual Assault Response Team (SART) by UCT—a team that is still being developed—is a way for the university to defer responsibility on sexual violence issues.

“I know that the members spent one of the meetings trying to decipher already-confusing disciplinary procedures and policies,” she said.

Speakers from other organisations, such as Rape Crisis, Patriarchy Must Fall and the Black Academic Caucus, addressed the crowd as well, voicing their solidarity for the campaign.

Roshila Nair, a UCT master’s student and a member of the Black Academic Caucus, shared her experiences on campus 20 years ago. Nair, now 47, was a student at UCT in 1995 when she left because of trauma she had experienced from being raped twice. Upon returning to UCT to complete her degree, she has found that she is confronted with the same situations.

Students, who are “young enough to be my children,” have to take up the issue of sexual violence at UCT because it could not be resolved 20 years ago, she said. She wants to see UCT help women who are survivors of sexual violence get on with their lives.

Nair then read a statement by the Black Academic Caucus that said SART is a good start, but still just a start. The culture that supports sexual violence remains intact, it said.

Before opening the forum to public comment, Gwala read a list of demands for Price and management. The demands include:

Gwala said that Price has one week to respond to the list of demands.

One participant who chose to speak during the open-mic portion of the event voiced her demand for a document that outlines the difference between sexual harassment and sexual assault.

At the end of the event, Price responded by saying that the students and management have the same goal of creating a safe campus. He asked the students to collaborate with management instead of pulling away.

Price said he could not respond to individual cases that had been brought up throughout the forum by both speakers and participants.

Management will try to address security issues to make women feel safe on campus, he said.

There has been an effort in the past six months to refresh management’s commitment to this issue, he said. Management responded to a review of its policies, is working with wardens to change the culture in men’s residences and is looking at wellness support services.

The event by now had gone overtime. Price opted not to take questions, which was met with complaints from some people. One participant then got embroiled in an argument with Price. He walked away from the event saying that he was not being given the chance to respond to her points and therefore could no longer engage in a conversation. The two also accused each other of disrespect.