Protest on campus in response 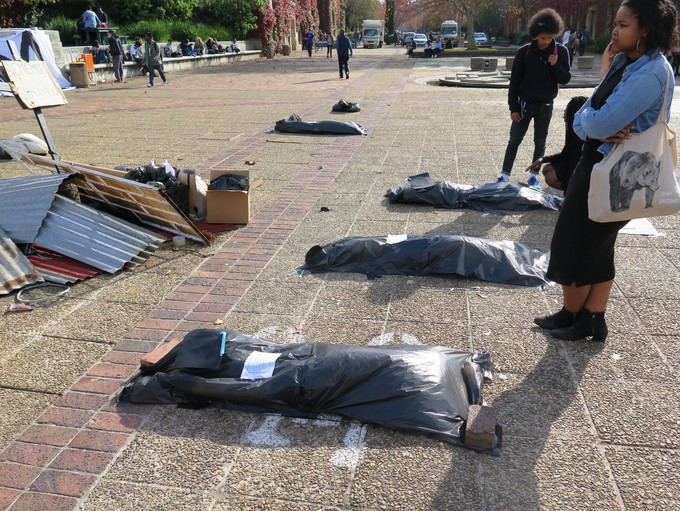 An interdict against a number of University of Cape Town (UCT) students was made an order of court yesterday. As a result, five students find themselves effectively expelled.

The five (of the original 16 named respondents) are not allowed on campus for an indefinite period of time except with express written consent of the vice-chancellor. They are: Alex Hotz, Masixole Mlandu, Chumani Maxwele, Slovo Magida and Zola Shokane. They will also have to pay UCT’s costs including the costs of two counsel.

This morning, a handful of protesters assembled on UCT’s Jameson Plaza calling on UCT to “bring back our cadres”. A large cloth was laid out on the steps proclaiming: “Death of Dreams”. By noon the protest had grown to dozens of people.

“Body bags” were also laid out on the ground representing the students who have been prevented from entering campus.

The interdict arises after the Shackville protests on 16 February around accommodation at UCT, where protesters erected a shack on the campus, calling for students, especially black students, to be housed in university accommodation. The protest escalated.

In the order, Judge Allie writes: “Concerning the disruptive and destructive form that the protests took, it cannot be said that the apprehension of it recurring is not reasonable given the great lengths to which some protesters went, to perpetrate the destruction. The unrepentant stance adopted by the respondents, led the applicant to believe that the harm could recur if an interdict is not granted prohibiting the misconduct complained of.”

Allie writes that the university has no “adequate alternative remedy” to prevent further damage to property. Disciplinary action as well as claiming damages are slower processes.

This article was updated with additional information after publication.