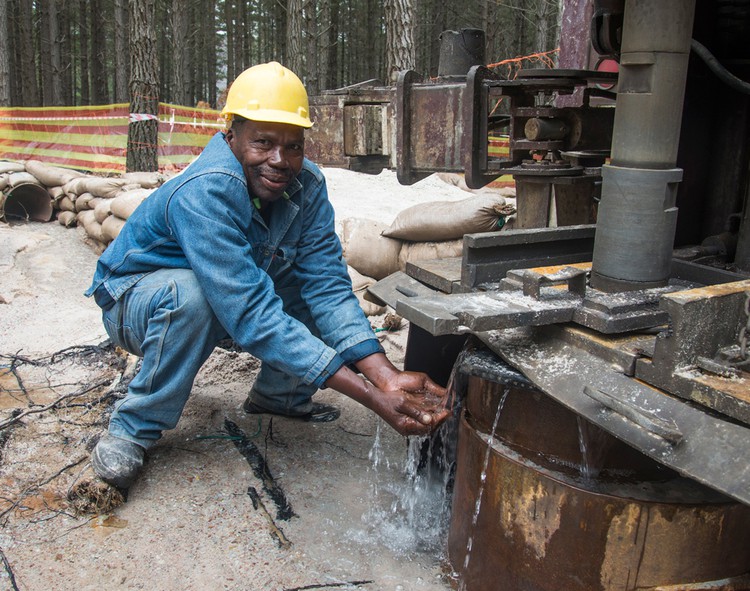 The City of Cape Town’s emergency groundwater drilling programme will be formally scrutinised by an environmental monitoring committee. This is to ensure boreholes are located in ecologically acceptable areas and are operated responsibly.

The programme that initially proposed as many as 222 hastily drilled exploration, monitoring and production boreholes – some in highly sensitive nature areas harbouring critically endangered plants – has been temporarily scaled back. Further work on two boreholes already being drilled in the Steenbras nature reserve area has now been temporarily halted while concern about the environmental impact on adjoining vegetation is evaluated.

Like the other wells already drilled or still in the planning phase at Steenbras, these two wells are located within the “utility” section of this protected area that is reserved for functions such as bulk water provision and forestry, although they are close to the nature area edge.

The City’s new Emergency Water Augmentation Environmental Monitoring Committee is scheduled to meet for the first time on 20 March 20th. Its members include representatives of government departments and CapeNature, and some of the UCT scientists who recently issued an open “Statement of Concern” about the proposed groundwater drilling programme.

And this week there will also be a second, informal meeting of botanists, geohydrologists and environmentalists chaired by Dr Guy Preston, deputy director-general of the national Department of Environmental Affairs and head of the Working for Water Programme. The purpose of the meeting will be to discuss concerns about groundwater abstraction.

In their statement on 16 February, the UCT scientists expressed concern that abstraction from the Table Mountain Group Aquifer [which stretches all the way to KwaZuluNatal] as part of the City’s emergency response to the drought, was “surrounded by a high degree of uncertainty” and had potential negative environmental impacts – including a major threat to the integrity of the City’s water catchments and to the quantity and quality of water they could provide in the short- and long-term. “Quick and dirty solutions for today’s challenges will be paid for by breaking into the banks of future generations,” the scientists warned.

One of the UCT scientists, Jasper Slingsby, confirmed that he and at least one other of the five co-signatories had received an invitation to join the environmental working committee. He described its establishment as “a positive move” but added: “It’s early days yet and it could go anyway from here. We’re interested to see what they have to say. Initially the City was quite ambitious but they’re limiting [groundwater drilling] to Steenbras for now and they’re moving forward more conservatively.”

The City has confirmed that the establishment of the committee and the halting of drilling on the two boreholes are at least partly in response to the UCT scientists’ concerns. During a visit to the Steenbras drilling site last week by some councillors and journalists, the City’s acting project manager, David Allpass, was asked whether the UCT statement had triggered heightened awareness of environmental concerns about drilling. He responded: “I would say, probably yes.”

Deputy Mayor Ian Neilson says the City is following a “no regrets” approach to the abstraction programme that is based on “years of research”. “This means that we have been doing everything that we can to understand our underground resources. We aim to err on the side of caution so that we do not do anything that could cause permanent damage to this resources.”

The drought was declared both a local disaster in March 2017, a provincial disaster in May 2017 and reclassified as a national disaster in February 2018. Because of these declarations, Neilson pointed out, the City and other Western Cape municipalities had been issued with a special emergency directive in terms of the National Environmental Management Act (NEMA) to augment its bulk water supplies. However, this did not mean it could ignore statutory environmental management requirements, he emphasised.

“The directive permits augmentation schemes to proceed without unnecessary delays, but it does not exempt the City from compliance with NEMA or any other applicable legislation. In addition, the projects must comply with the approved environmental management programme, method statement and general duty of care which aims to protect the environment and ensures compliance with applicable legislation.”

Each project had a dedicated environmental control officer to monitor the abstraction process and ensure compliance with statutory requirements, Neilson added.

The emergency groundwater abstraction programme also involves drilling in areas like the Helderberg, South Peninsula, Wemmershoek and Nuweberg in the Boland, but for now the City will confine test drilling to the Steenbras area.

Here, some 35 potential drilling sites targeting the shallow Skurweberg aquifer and the deep Peninsula aquifer below that – both are part of the overall Table Mountain Group Aquifer (TMGA) – will now be subjected to careful environmental screening before being reduced in number to establish a full-scale well field of about 15, or even fewer, boreholes. These should provide good water yields at the least environmental cost.

Phase one of this project is expected to yield 10 million litres of water a day to be pumped into the nearby Steenbras dam.

During the Steenbras site visit, Barry Nefdt of drilling contractor SA Rockdrill explained that three shallow production boreholes had been completed. Two had been started but then temporarily stopped for environmental reasons, and two new sites were being prepared for drilling. One (exploration) borehole was being deepened from its original 300m depth. It is now at 550m and operators are hoping to hit the deep Peninsula aquifer at about 650m.

Nefdt said the 35 potential production well sites at Steenbras would be assessed environmentally by the consulting engineers, their specialist team and fynbos ecologists – “There’s a wide group of people who will review each site”.

Allpass said the City had adopted a “very high” duty of care approach, despite being in a disaster situation, and compliance levels had been set to “very, very high standards”. “We police ourselves, and if need be we stop and put in checks and balances . If the alarm is raised, we react to that,” he said.

In terms of national water and environmental legislation, the act of drilling a borehole does not require a formal environmental impact assessment process. However, a duty of care still applies to the drilling operation – for example, ecologically sensitive areas must be avoided and all disturbance minimised – and the construction or introduction of any associated infrastructure or services beyond the limited drilling area such as powerlines, roads and pipelines usually attract an EIA requirement.

National Water Week, an annual seven-day event co-ordinated by the national Department of Water and Sanitation, kicked off on Sunday, 18 March.