UCT invites “conspiracy theorist” to talk about decolonisation of science

Academics furious with decision to give CK Raju official platform 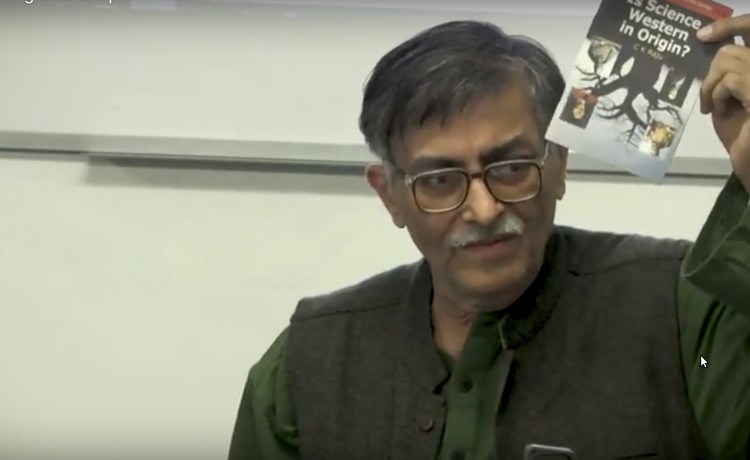 Professor CK Raju holds up a copy of his book Is Science Western in Origin at a UCT panel discussion on 19 September. Photo extracted from Youtube

University of Cape Town academics have expressed dismay that the institution invited Professor CJ Raju, vice-president of the Indian Social Science Academy, to be the main speaker at a panel discussion titled Decolonising Science.

Described as a “crank” by one UCT professor and a “conspiracy theorist” by another, Raju gained some notoriety last year when an article he published in The Conversation was withdrawn. The article articulated Raju’s Indian nationalist views in which he rejects what he calls “Western” formal mathematics. He argues in favour of a revisionist history of mathematics that elevates the Indian role.

His talk at UCT on 19 September, placed on YouTube by the institution, contains numerous fringe claims. For example at about 7 minutes 15 on the video he dismisses a concept mathematicians deal with on a daily basis: the infinitesimally small. He then mocks people in the audience who work with this.

Raju was formally invited by the Deputy Vice-Chancellor for Transformation, Professor Loretta Feris, and UCT’s Curriculum Change Working Group “to engage students and staff on his views”. The dean of the science faculty, Anton Le Roex, formally declined to participate in the panel discussion.

Jeff Murugan an Associate Professor in UCT’s maths department told GroundUp: “I believe deeply in the freedom of ideas and information. As such, all ideas should be heard. However, with Raju, UCT has just given an official platform to a set of ideas that are, at best, fringe, and lauded them as a revolutionary challenge to mainstream science. They are not. Much of what Raju says either reflect a very shallow understanding of the nature of science or, when they are correct, trivial.”

Murugan said that he was deeply concerned that the changes that Raju advocates in his decolonising mathematics project amount to a neo-bantu education that, implemented in South Africa, would see our students unable to compete in the global marketplace of ideas. He gave several examples of measures he and others in the maths department had taken “to improve what we teach and how we teach it, paying specific attention to students from previously and currently disadvantaged backgrounds.”

“Any one of these initiatives are far more meaningful in the South African context than Raju’s philosophy of going back to thinking like the Indian sages of old,” he said.

In response to a GroundUp question whether giving official sanction to Raju, who dismisses almost the entire body of work done by UCT’s scientists and mathematicians, is a productive way of taking forward the decolonisation debate, Feris replied:

“Professor Raju was invited not so that his views by necessity replace existing ones, but rather as a departure point for debate. Raju challenges existing dogma at a time when we as a university are reflecting on our colonial history and the ways in which we as a country have embraced colonial epistemology. Raju’s message to students is that they should question Western Authority on science and insist instead on empirical evidence on truth. To faculty, he asks that if we teach the exact similar science as taught in the West, we should be able to justify why that is so. First - we must explain our exclusion of other approaches to science from other parts of the world. Secondly, we should demonstrate the benefits of science as taught and understood in the West, and explain why local communities may be rendered only beneficiaries, and never co-producers of scientific knowledge. Professor Raju essentially rejects the notion that the Western philosophy of science and maths is objective and universal. This aligns with the decolonial questioning of Western thought as the singular truth. Professor Raju invites us to think about philosophy other than that which originated in the West, Eastern and African philosophies of science and maths. It seems to me like a constructive way to engage in a discussion on decolonial thinking, regardless of the discipline.”

In response to this Judge Dennis Davis, who like Feris is in the law faculty, told GroundUp: “While a vigorous debate about knowledge production at a university is vital to its mission, part of the debate is who participates. [Feris’s] response fails to address this key question: does participation include an advocate of a flat earth, a denialist of evolution, an advocate of potatoes and garlic in place of antiretrovirals for people living with HIV, an advocate of eugenics? Remember UCT disinvited Flemming Rose [the Danish editor who published cartoons of the Muslim prophet Mohammed] so this is not about its steadfast commitment to free speech fundamentalism.”

“His talk has nothing positive to contribute to the discussion, not just because he advocates replacing the internationally agreed approach to mathematics and physics by his own idiosyncratic views, but particularly because he explicitly advocates ignoring the views of international experts on scientific topics in his decolonial approach to science and maths. If UCT were to follow that route, we’d better close down the science and engineering faculties. The degrees we will produce will be worthless,” said Ellis.