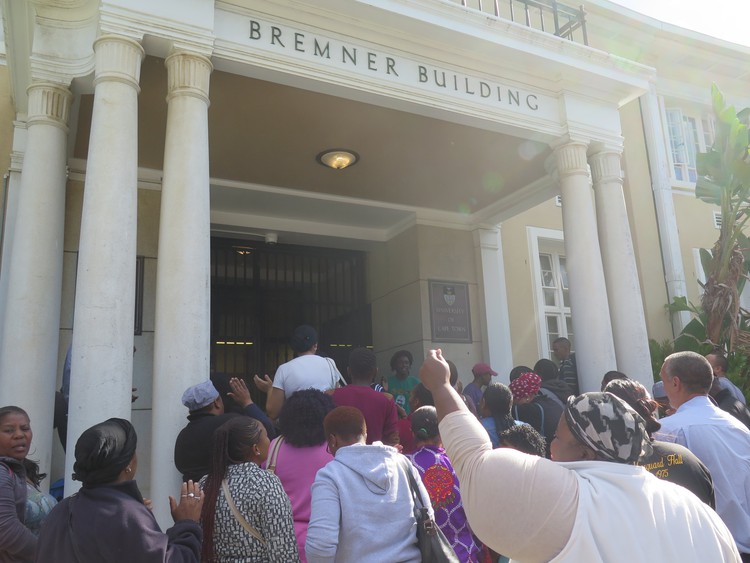 About 50 catering staff at the University of Cape Town picketed outside the Bremner Administration building today over their conditions of employment since coming onto the university payroll.

One member of the kitchen staff who didn’t want to be named said conditions were worse since they had been insourced. The workers were previously employed by C3 Food Services which provided catering services to UCT.

She said salaries had increased but that new rules had been implemented that had left many staff unhappy.

“It’s like they grab your happiness away for money,” she said.

If they didn’t work on a public holiday, workers were forced to take unpaid leave, she said. She also said casual workers who worked on the weekends were not skilled, which meant extra work for permanent staff.

They were also upset about changes in pay for those working on the weekends.

Another member of the catering staff said workers’ provident fund money had not been paid out when they were insourced by UCT. She said that C3 had said UCT would pay them out when they left the university. “But it’s our money from C3,” she said angrily.

On 14 March the catering staff met Vice-Chancellor Max Price and voiced these concerns to him. But two months later the issues had not been addressed, the workers said.

SRC member Masixole Mlandu addressed the group, saying that without staff like them, the university wouldn’t be able to run.

“It looks like the university doesn’t take your demands seriously,” said Mlandu.

Professor Daya Reddy, acting vice-chancellor, listened to the workers’ demands. He said he took their concerns seriously but could not respond because he didn’t have the details of progress made in addressing their concerns. Reddy promised to follow up with the vice-chancellor.