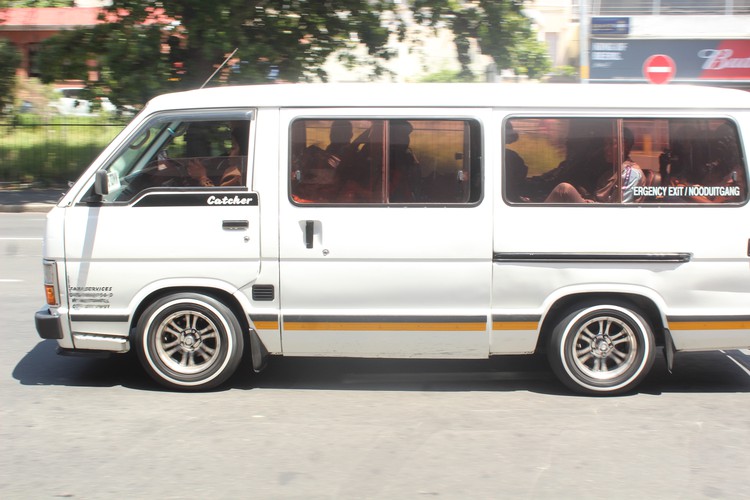 Uber drivers accuse minibus taxis of extorting money from them. (This is a generic photo of a taxi.) Photo: Masixole Feni

At about 3:30pm on 18 October, Safwaan Amansure received an alarming phone call from the man who drives his car for Uber, Moses Chikove. Chikove had been stopped by two minibus taxi drivers who impounded Amansure’s car at one of the Delft taxi ranks, and demanded money for its return. Amansure was told to bring R2,000 as a “spot fine” by the minibus taxi drivers.

“They asked me: ‘Why are you driving? We don’t allow Ubers here,’” said Chikove. They also harassed him about being Zimbabwean and driving in South Africa, he says.

He had clients in the car when he was stopped who then had to be picked up by one of their husbands. Amansure called the police and met Chikove and the drivers at the taxi rank. After arguing in the rain for several hours, Amasure says the police told the drivers and him to go to the Delft police station, which they arrived at about 6:30pm.

Upon arriving at the station, Amansure began recording part of his conversation with the police, specifically a Captain and a Lieutenant Colonel.

Lt. Col. Vani speaks to him in Xhosa and English and says: “Maybe you should sit down and discuss this with them.”

Amansure tells her: “This is not right ma’am. I don’t feel safe here, because this is not my area, and I might as well leave without the vehicle then. Because if I must pay them a bribe to get my own car back, it’s not right. Then I might as well let them destroy it and report it stolen.”

“But what are you going to do now?” asks the Captain [name not provided]. “Because you just told them they must take it there to their office or their impound.”

“Because that is what they said they were going to do!” exclaims Amansure.

“So that’s what they’re going to do now. So, from there, you go to their office and report that to your attorney,” says the Captain.

“But who must I report it to?” demands Amansure. “I’m reporting it to the police and the police are not assisting me!”

The Captain asks Amansure how they can assist him, to which he replies they can help him get his car because he never agreed to pay the minibus taxi drivers.

“Did I say you’ve agreed? You said they must take your car, didn’t you say so to them?” says the Captain.

“Because they are asking me for money, or else they will take the vehicle,” explains Amansure.

“And you said they can take the vehicle, didn’t you say so?” the Captain asks.

Amansure is heard laughing in the recording. “So, you mean they can extort me in the police station and nothing will happen?” he says.

“They are extorting you?” says the Captain.

“Yes! The guy, he asked me now, give me something. I came here for help, and you are helping them,” says Amansure. “It is my vehicle and I have rights to that vehicle, but now I can’t get it, even with the police.”

The exchange carried on for a few more minutes, and Amansure was told to go and sort it out with the taxi drivers. He ended up paying them R500 and got his car back.

“These guys have a way of taking money from Uber drivers,” said Chikove. “I’m not feeling safe anymore, even though we have an operating permit to drive here.”

He said other Uber drivers have also been threatened by the minibus taxi drivers.

One Uber driver, Lloyd Kapfumbe, told GroundUp how he was stopped by minibus taxi drivers while driving his wife to church in Bellville. The taxi drivers asked if he worked for Uber, and he said yes, but he wasn’t working then; he was driving his family to church. They told him they didn’t like Uber in the northern suburbs and demanded his keys or R1,500. Kapfumbe said he didn’t have that much money with him, so he paid them R800, he says, to protect his family and keep his keys. Kapfumbe is Zimbabwean and believes xenophobia is at play in these attacks.

“I think we are heading for an e-hailing war as minibus taxis attempt to lay claim to this industry, as is happening in Durban,” said David Drummond, Chairperson of the Section 66 Association, in an email sent to GroundUp. “Taking someone’s vehicle because you don’t want their business in your area is insane.”

“I think there’s too many people who have a lot invested,” said Amansure. “We bought the cars. Uber doesn’t allow us to be armed in the vehicle, but I will tell you most of the drivers are armed. They’re trying to feed themselves and other families with that one car. I don’t think the guys are going to take this lying down.”

The Delft South African Police Service declined to comment but referred GroundUp to the Western Cape spokesperson who did not reply to inquiries before publication.

An Uber spokesperson responded to an earlier inquiry with the statement: “While these incidents are isolated, the safety of our riders and driver-partners is a top priority. Our Law Enforcement Relations Team are on call to work with police at any time to respond to urgent needs. However, we encourage Uber driver-partners and riders to report any incidents of intimidation to Uber and the police to ensure these issues can be resolved.”