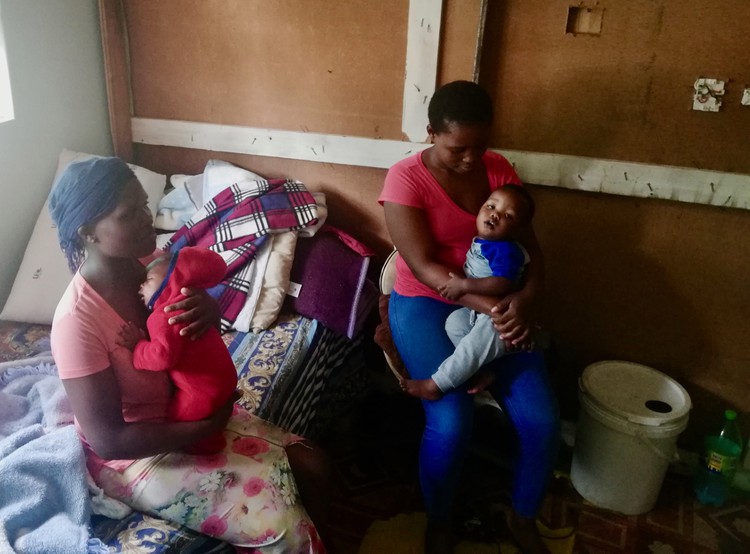 Sisters Thando Soja and Cetyiswa Sikwele live in a room separated by boards from another family. Photo: Ella Ndongeni

A fire in March 2017 destroyed about 3,500 homes in Imizamo Yethu, Hout Bay. Since then, “reblocking” – in which shacks in densely built informal settlements are repositioned to open up pathways for services – has divided the community and created an ongoing fight between the City and residents in Imizamo Yethu.

Some of those who lost their homes in the fire were unhappy with the City’s plans, especially the reduced size of the shacks the City was going to provide. Some also feared that the temporary accommodation they would be moved to during reblocking would become a permanent state of affairs.

Many of those who supported the reblocking plans were moved to temporary relocation areas (TRAs). They were told it would be for only three months, according to community leaders, but many remain in temporary accommodation.

Some, who say they never received starter kits from the City to rebuild their shacks, have sought shelter in several unused municipal buildings in the area.

In an old Parks and Recreation depot building, eleven families now live. The windows are broken and they use cardboard to cover them. There is no electricity and no working toilets. Some rooms are subdivided to allow for two families.

“It is not the better life we envisioned when we agreed to reblocking,” says Nomsa Spoko.

“This is how we have been staying for two years with my children and husband, in this small room. This is worse than where we were staying [in a shack].”

“We have tried to make privacy, but there really isn’t any. I can hear all my neighbours’ conversations,” says Spoko.

A family of four lives on the other side of the room. They are sisters Thando Soja and Cetyiswa Sikwele, their young son and one-month-old baby. The sisters are unemployed and depend on their children’s social grants.

“This place is so cold and there are children here … If we had money we would go and rent but we cannot afford to,” says Soja. “We are stuck here.”

Mayco Member for Human Settlements Councillor Malusi Booi said that only some of the occupants of the building were affected by the 2017 fire, and only those affected by the fire received fire kits. But he said the City was looking at ways to move the occupiers to TRAs. “Fire victims living in the depot buildings will be verified against a primary fire victims list, before relocating to the identified spaces,” he said.

He also said the City intends to “regroup” with the community leadership in the next week to finalise the relocation plans.

He said the City remained committed to the reblocking project, but ongoing court action between the City, some of the occupants of “Road One” (an area which needs to be cleared for reblocking) and the Hout Bay Ratepayers’ Association had halted progress.

He said reblocking would accommodate roadways for emergency vehicle access as well as to allow for the installation of water, sanitation and electricity throughout the area.

“These services would see the quality of life and dignity of all residents of Imizamo Yethu improved. For this to happen, some residents had to be moved to temporary sites (TRAs),” said Booi.

After the fire, the City brought a court application to evict residents to make way for reblocking in Road One and to relocate the evicted residents temporarily in an area called Triangle. But the Road One residents, represented by the Legal Resources Centre, opposed the City’s terms for relocation, which involved moving them into 3x3m2 structures.

The Hout Bay Ratepayers Association joined the City’s eviction application. But it also brought a further application to set aside the City’s decision to rezone the Triangle area to allow for the temporary accommodation of Road One residents.