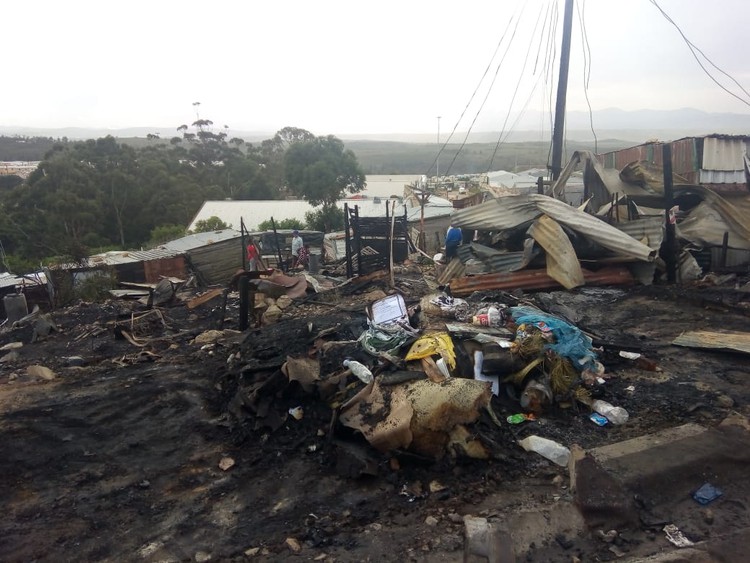 The charred belongings of families whose shacks burnt down in Qolweni in Plettenberg Bay on Tuesday. Two people who died in the fire are yet to be indentified. Photo: Siphokazi Mnyobe

Two people died in a fire that gutted 13 shacks and damaged five more in Qolweni informal settlement in Plettenberg Bay on Tuesday. At least 25 people were affected.

Ward 3 Councillor Xola Matyila said the fire started before 6am, and is believed to be arson.

Community leader Siyabonga Momo said, “It pains us that we can’t identify the two deceased and inform their families. The third guy who was with them ran away, so we are struggling to find him because he owns the shack where the fire is said to have started.”

The deceased are believed to be a man and the girlfriend of the shack owner who ran away. Authorities are yet to determine their identities.

Momo welcomed the prompt assistance by the state to help the fire victims. “We just hope that they will keep the promises they’ve made to the people,” he said. This included that uniforms will be brought for affected learners so that they do not have to miss school.

Bitou Municipality Acting Mayor Sandiso Gcabayi also visited the fire victims. In a statement later that day, the municipality said that material to rebuild the shacks will be provided to accommodate the homeless families.

According to the statement, Gcabayi also promised to ask Home Affairs to assist people who lost their IDs and birth certificates.