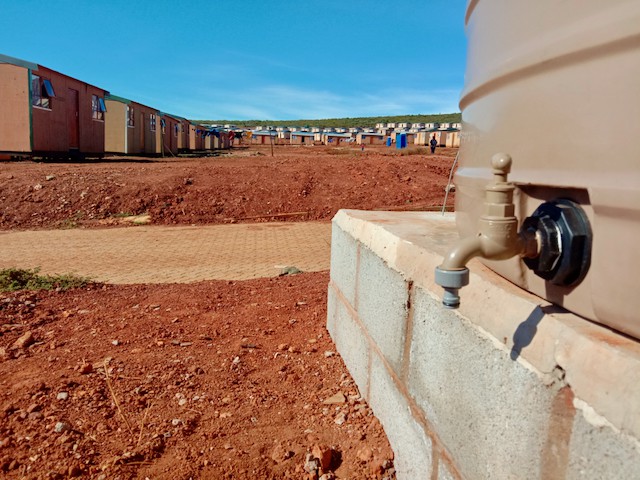 Eight jojo tanks have been dry for the past two months in Dubai, a temporary housing settlement for elderly, disabled and vulnerable people from ward 45 in Kariega. Photo: Thamsanqa Mbovane

For the past two months, eight jojo tanks have been dry in Dubai, a temporary housing settlement of 500 structures meant for elderly, disabled and vulnerable people from ward 45 in Kariega.

The R30-million Dubai project was also part of a de-densification programme to reduce overcrowding in informal settlements in wards in the Zola Nqini Cluster because of Covid-19.

Ward 45 Councillor Siphiwo Plaatjies said underground pipes had been vandalised and broken, which is why they had put in the jojo tanks as a temporary arrangement. He said it was news to him that the tanks were dry.

Resident Bukelwa Dloto says she regrets moving to Dubai. “I arrived here in December, but I am not happy because I have been denied a basic right and that is water … No one communicates with us.”

“One of the young men in this settlement charges R30 a trip by trolley to fetch water for me,” she said. “I even owe him some money.”

Nontombi Sam said she arrived in the settlement with her husband, Kwenzekile, in February. She said, “We used to stay in the rented house with our seven children and we relocated here, but only to be … struggling to get water day after day.”

She said the water in the tanks tasted salty and they complained. The water was replaced but that was at the end of February.

She said they sometimes hire a vehicle to fetch water from neighbouring wards.

Blondie Manziya, who uses a wheelchair, said his aunt has to push a wheelbarrow to fetch water on R Alexander Street.

Manziya said, “It is better where I was staying in a shack than here in a bush in a bungalow because water taps were closer.”

Ward 45 committee member for human settlements Mthuthuzeli Ciki, who walks with crutches, said he has repeatedly reported the matter to the directorate.

“This [Nelson Mandela Bay] municipality is busy sprinkling water on roads such as Bantom Road as they are building tarred roads whilst the elderly and persons with disabilities are in need of water in Kariega,” said Ciki.