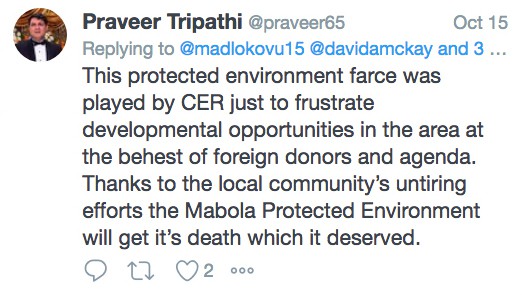 Praveer Tripathi, senior vice-president of Atha-Africa Ventures, promised to behave better on Twitter, but he just can’t help himself.

A senior executive in a coal mining company promised to be “more sensitive” after formal complaints to the Minerals Council South Africa about his abusive social media comments.

But despite that assurance, Praveer Tripathi, senior vice-president of Atha-Africa Ventures Pty Ltd, has not stopped posting such tweets aimed at those challenging his company’s Yzermyn coal mine project in the Mabola Protected Natural Environment near Wakkerstroom.

His latest tweets include repeated accusations that the opponents of the mine accept “slush money” from foreign interests supposedly opposed to development in South Africa, and are a “danger” to South African society.

Tripathi gave his assurance to the Minerals Council (formerly the Chamber of Mines) after a complaint in June by the Centre for Environmental Rights (CER). The CER is a public interest group of attorneys that represents a coalition of eight environmental and social justice groups opposing the Yzermyn coal mine project. Atha Africa Ventures is a Minerals Council member and is bound by the council’s mandatory code of ethical business conduct and guiding principles.

In a letter of complaint addressed to Minerals Council executive chairman Roger Baxter, CER executive director Melissa Fourie said Tripathi had “for some time” been making inaccurate and defamatory statements about the Centre and the coalition it represented, including on social media. However, the CER decided to make a formal complaint after Tripathi “liked”, and retweeted without comment, a tweet by an individual associated with his company that contained a thinly veiled death threat. This, Fourie argued, had to be viewed in the context of increasing attacks on environmental justice activists both globally and in South Africa. Pointing out that locally, at least one anti-mining activist had been assassinated – Bazooka Radebe at Xolobeni in Pondoland – Fourie asked the council to investigate and take action.

In July, the Right2Know Campaign, supported by 92 other organisations and lawyers’ groups, also condemned Tripathi’s social media comments and called on the Minerals Council to clarify its position on the matter.

The council responded to the CER only in late September, confirming it had met Tripathi to discuss the complaint. “He says he had no intention of supporting violence. However, he acknowledges that, in hindsight, he could have expressed himself differently, and says he will in future be more sensitive in this regard. The Minerals Council has accepted his assurances, and we trust that you will too,” its letter to the CER stated.

But this response did not satisfy the CER. Fourie replied the following day: “In view of the nature of the statements made by Mr Tripathi – not only supporting statements that incite violence, but also attempts to intimidate us and our clients by accusing us of ‘economic sabotage’ and ‘treason’ – we had hoped that the Council would take stronger action against its member,” she wrote.

The CER would monitor the conduct of Mr Tripathi and Atha Africa Ventures closely, and might approach the council again “should it prove to be necessary”, she added.

Tripathi appears to have removed many of his earlier tweets from his Twitter feed, including his retweet of the death threat. But he has also posted new abusive comments about the coalition and the CER. Two of his tweets from a fortnight ago read:

– “… ask your masters, the Centre for Environmental Rights about how much money they make from their slush foreign donations to keep SA in permanent recession and high unemployment” (18 October); and

– “Blatant blackmail by the foreign funded anti development anti people Centre for Environmental Rights to the MP’s threatening legal action to stop development in SA. This Civil Society is a danger to the society and not so civil.” (16 October)

Last month, Tripathi also attacked Fourie in person in a number of tweets, calling her a “liar-in-chief”. However, these tweets now also appear to have been removed.

Tripathi was invited to respond but opted not to comment.