Students in Pietermaritzburg protest at closure of hostels 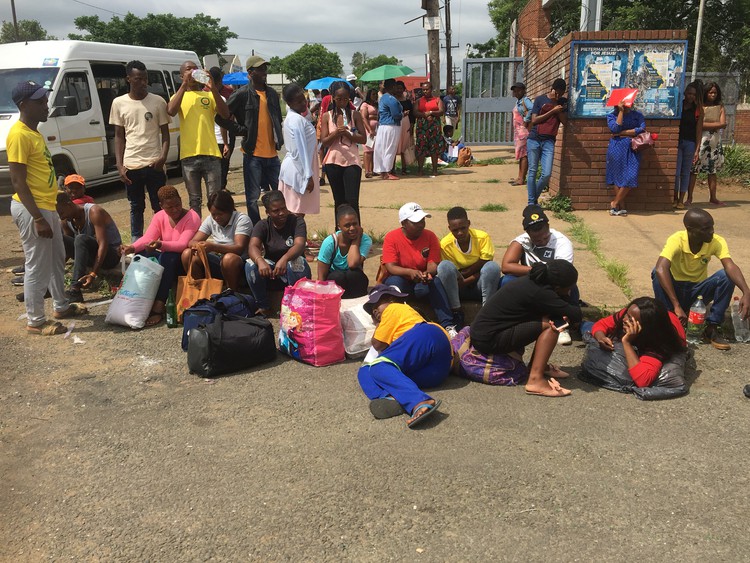 Students at the TVET college in Imbali are protesting outside the gates over the closure of hostels. Photo: Nompendulo Ngubane

UMgungundlovu TVET College in Imbali in Pietermaritzburg has been closed by students angry at the closure of three hostels. About 200 students are protesting, preventing other students and staff from entering the campus.

Since last week about 30 students have been sleeping in a community hall in Imbali. Others have found a place to sleep with neighbours.

“Classes should have started today [Monday],” said SRC president Sthoko Langa. She said the college had not informed the students about closing the hostel.

“We came back last week and found the paper on the notice board. On the notice they told us there was no accommodation available inside the college. We were not aware that they would be closing the hostel. Many of us are here to start lectures. We have no place to sleep and we have no food. The ward councillor assisted by offering us the community hall,” said Langa.

Third year student Bongiwe Madlala said the students were relying on food donated by the ward committee in Imbali.

“We are still waiting for money from NSFAS [the National Student Financial Aid Scheme]. We will not start classes until the college attends to our problems. They must let us stay in the hostels for a few months. We will look for another place to stay,” said Madlala.

When GroundUp visited the college, students were outside the gates. Some were sleeping on their bags.

“I’m from Nquthu,” said Sibongiseni Dlamini. He is doing his third year in engineering. “If I don’t have a place to stay, I won’t be able to study. I have no money to pay for rent. I’ve been dependent on accommodation inside the college. If they end up not sorting out the accommodation issue, I have no choice but to drop out.”

Buhle Mngoma from Stanger said she had been offered a place to sleep by a household near the college. “I am struggling with food. The money I had is finished.” She said students would not open the gates until the accommodation issue had been resolved.

College principal Ntombi Ntshangase said the council had decided in 2016 to phase out the hostels. “The SRC at the time agreed that the hostels would be closed in 2018. The hostel accommodation only benefited 200 out of the 10,000 students that we have. The hostel was to be converted into a teaching and learning building. In that way it would benefit more of our students. Students were made aware and we don’t regret our decision,” said Ntshangase.