Train surfers risk their lives without fear of Metrorail’s security

“I do it for adrenaline – the thrill can get addictive” 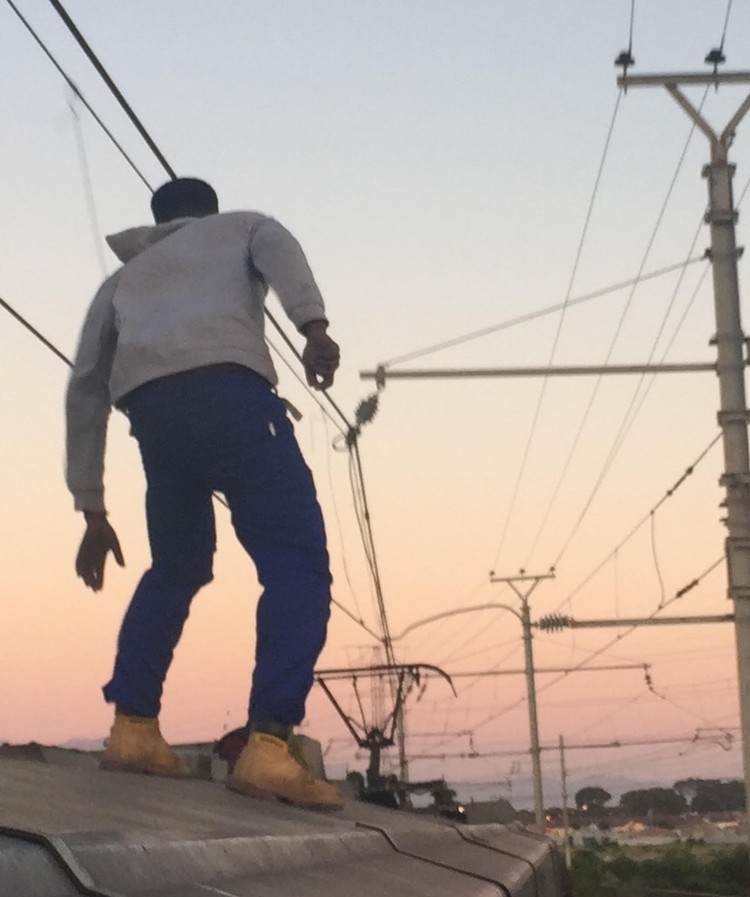 A man surfs on top of a train in Cape Town. Photo: Ricardo Afrika

Young men in Cape Town risk their lives by “train surfing”. Ricardo Afrika photographed and filmed train surfers by sticking his cell phone camera out of a broken window on Metrorail’s central line.

Train surfers stand outside a train, either on the side or on the top, while a train is moving. They perform stunts, such as dodging the overhead lines. It is extremely dangerous and illegal.

Most train surfing appears to take place between Mutual station and Khayelitsha. The images and videos here were filmed on 10 October at about 6:45pm between Philippi and Stock Road stations.

Surfing typically takes place during peak hours — between 7am to 8am and from 3pm to 7pm. Trains are often congested during these times. Commuters hang on doors, windows, between carriages and even on top of the trains. But train surfing means more than merely hanging on to the outside; it involves doing stunts too. There were about ten people surfing when these images and videos were shot.

Surfers range in age from school boys to blue collar workers. Primary and high school students typically do what is called “ukulathaza”: running next to the train on the platform until it is at high speed, and then they jump in. Some of the adults take it to the extreme of running on top of the train while it is in motion and ducking under cables and bridges, as in the videos below.

No one appears to make a serious effort to stop the surfers. There’s a lack of security and the trains are packed, with no authorities around to check on safety. If there are security personnel, they usually stand with the drivers on each end of the train, which means they can’t really see what happens when the train is in motion.

“Spiderman” is a blue collar worker who surfs. I asked him why he does it. He replied, “To us this is a sport. I mostly do it for adrenaline and the thrill can get addictive.”