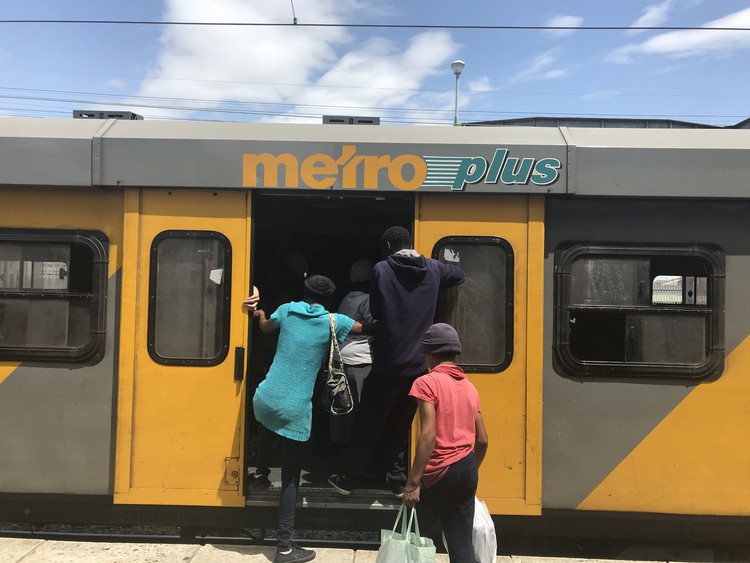 A group of Metro ticket holders protested on Wednesday by refusing to leave a MetroPlus carriage. This incident is one of many that highlights the daily struggle faced by Metrorail commuters. Photo: Tariro Washinyira

A ticket inspector on Metrorail’s northern line was met with a protest by frustrated commuters who refused to move from a MetroPlus (first-class) carriage to Metro (second-class) carriages that were already packed to capacity.

“I have had it with Metrorail’s unprofessional and unreasonable staff,” shouted Fredrick Goliat, a monthly metro ticket holder. He was travelling from Cape Town to Goodwood with his child on Wednesday when the ticket inspector demanded that he and other metro ticket holders disembark from the only carriage with available seating space.

“Metrorail ticket inspectors should be grateful that commuters are still buying tickets regardless of terrible service. A few times a week I use a taxi because of train cancellations and delays,” he said.

Now all commuters have to put up with delayed or cancelled trains, carriages with missing windows, doors that cannot close and broken seats. During rush-hour only the very lucky can sit. The burning of train carriages has also resulted in fewer carriages in services, even during peak-hours.

On Wednesday, Goliat and other Metro ticket holders said they had had enough and refused to move to the congested Metro carriages. A train normally has four metro carriages but on this day only had two. The ticket inspector then threatened to either stop the train or call the police to remove them. Commuters were seen pleading with the inspector, explaining that the Metro carriages were overcrowded and that another train wouldn’t be coming for a while.

After witnessing the incident, GroundUp raised the issue with Metrorail spokesperson Riana Scott who apologised for their inspector’s conduct. “It is unfortunate that we lack sufficient capacity due to the high levels of damage to infrastructure and train fleet,” she said. “Weighing up the rights of all commuters is a tough call as we are inundated with complaints from MetroPlus customers who pay a premium for their travel [but carriages] are occupied by Metro customers.”

Zackie Achmat, of the commuter activist group #UniteBehind condemned the harassment of passengers, particularly vulnerable people like women and children. “Inspectors have a legal duty to protect women and children from unsafe conditions on trains. This incident illustrates the contempt PRASA holds for commuters, the Constitution and courts. We will return to court to ensure that all commuters especially the vulnerable commuters are protected,” he said.

Class distinction on trains is outdated and unnecessary

The separation of South Africa’s commuter trains into MetroPlus and Metro should have been done away with many years ago. Very few cities around the world with decent commuter train systems have class distinctions.

No matter which carriage you travel in, you should expect to get to and from work safely and on time. All carriages should be in good condition. It’s probably a bit much to expect to travel comfortably during rush-hour, but you should at least be able to stand securely without having your personal space erased.

In Cape Town, the class distinction between Metrorail trains has broken down because of dysfunctional chaos. Yet two ticket prices are still charged and, as the story above shows, ticket inspectors still enforce it.

Spare a thought though for the poor ticket inspector. He’s probably poorly trained, not very well paid, and trying the best he can to do with what he imagines is his job. He is also at the frontline of commuter anger that has been caused by incompetent and corrupt PRASA managers.