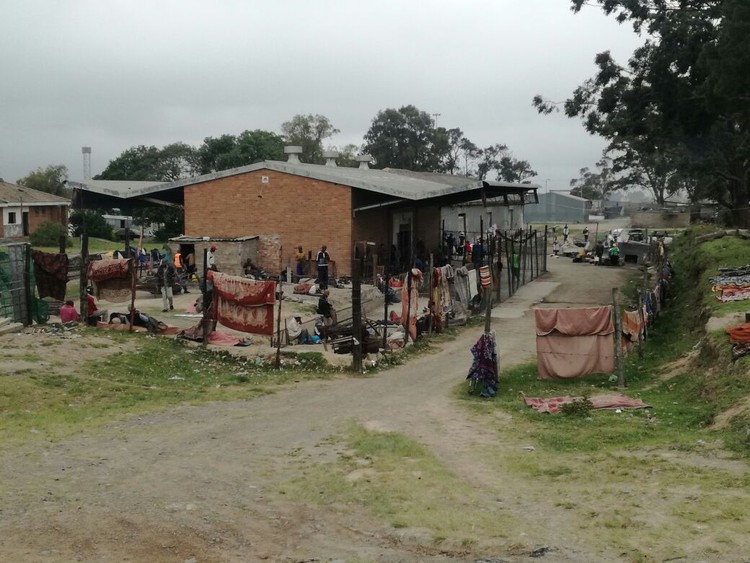 Patients were removed from the Khululabantu Bam Centre in Butterworth because the facility is unable to provide decent care. Photo: Nombulelo Damba-Hendrik

The Khululabantu Bam centre in Butterworth brings into focus the huge gap between the demand and supply for decent mental health care facilities in South Africa.

In November we visited the facility. It was run in an abandoned warehouse next to a railway line. The warehouse had no windows and was divided into two rooms and a reception area. The rooms had too few beds, and these were in poor condition. Patients had to share the beds or sleep on mattresses on the floor. The floors were made of cement so it was cold; it must be much worse in winter.

There was one pit latrine outside, even though at its peak this facility had about 100 patients. One of us mistakenly walked too close to this toilet. A man using it got angry that his privacy was being invaded and threw a stone at our reporter.

Patients were eating soup with bread, and some said there wasn’t enough food for them. There was no pharmacy and no staff were qualified to prescribe or dispense medicine. Many of the patients have substance use problems and yet there were shebeens located next to the facility. We also saw one patient with a leg chain on.

The place was dirty.

Khululabantu is a private health facility. It is almost certainly not legally registered. Yet the owner, Sandile Sese Stali, told us that Butterworth Hospital had referred patients to Khululabantu, as had the police. A field worker with knowledge about health-care facilities explained to us that this is plausible: it’s possible there was no space for the patients in Butterworth Hospital, and desperate staff placed the patients in Khululabantu in the absence of practical alternatives. It would not be unusual. This is similar to the way the Life Esidimeni tragedy unfolded.

We told some of this story in a report in November. Last week we wrote a follow-up story that the Eastern Cape Department of Health had moved patients from Khululabantu to the much better state health facility in Kirkwood near Port Elizabeth, but without informing the families of many of the patients. There they will receive much better care.

We tried to get explanations from the Eastern Cape Department of Health spokesperson Sizwe Kupelo as to why the patients were moved without informing their relatives. But three days later he had still not responded to our requests.

Stali must take responsibility for the state of Khululabantu, but the constraints he faced were enormous. Essentially he charged patients R1,500 per month. This generally came out of their social grants or was paid by their families. GroundUp has not seen his accounts, but even if he spent all the money on the patients, taking no money for himself, it would not be enough. Field workers say that it is impossible to run a decent care facility for less than R6,000 to R8,000 per patient per month.

It is likely there are other centres like Khululabantu, and not just in the Eastern Cape. The reason is that the demand for mental health care facilities far outstrips the supply of properly managed ones. Khululabantu likely won’t shut down, and apparently Stali is collecting more patients.

Hanging over this story is the spectre of Life Esidimeni in Gauteng. The Eastern Cape Department of Health rightly wants to avoid a similar tragedy.

Dr Ben Gaunt works in an Eastern Cape rural hospital. “Families should have been up-in-arms that relatives were being cared for this way. But for many it’s better than they could offer at home. Yet it’s not good enough. In general in mental health care we as society settle for second-best because there isn’t enough capacity for first-best. And that’s what Life Esidimeni has taught us, that second-best isn’t good enough.”