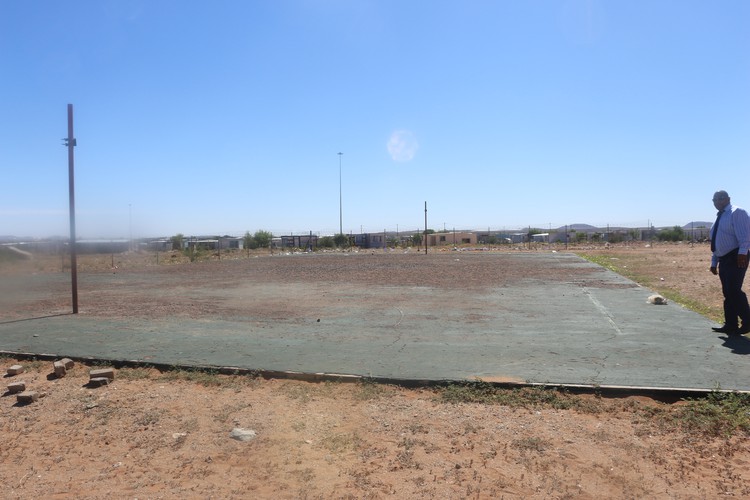 Principal Joseph Isaks next to the vandalised netball court which is Louisvale Intermediary’s only sports facility. Photo: Selby Nomnganga

Some township schools in Upington will hold sports events in the street again this year. The Northern Cape Education Department does not consider sports fields “a high priority”, and has encouraged the schools to apply for private funding.

Louisvale Intermediary was one of three new schools in the ZF Mgcawu district near Upington which opened in 2014. The school had no sport facilities except for the netball court. Now that has been vandalised and next month the seven-to-nine year old learners will run their athletics competition on a piece of gravel inside the school grounds. Sevens rugby for girls will take place on the same gravel patch. “They just run and enjoy the ball without any rough tackles”, says school principal Joseph Isaks.

Older learners practise athletics on the gravel space in front of the school yard and on the paved road going past the nearby high school.

For bigger events, the school has to hire a stadium from the municipality, like the Vela-Langa and Lukhanyiso Primary schools in Paballelo which also have no sports fields. A tennis court built in the early 1970s is the only sports facility at Lukhanyiso.

Geoffrey van der Merwe, media liaison officer to Education MEC Mac Jack, said a sports field “is not seen as a high priority” as the Regulations Relating to Minimum Norms and Standards for Public School Infrastructure put the deadline for their completion only in 2030. He said: “The Department within the next five years has increased the focus on the replacement of inappropriate structures, provision of reliable sanitation, water and electricity”. However, he said, the school governing body and the school should “explore avenues such as Lotto funding or donors such as solar farms or mines in order to assist with the construction of the sports fields.”

Meanwhile at Ibhongo Lethu primary in Paballelo, where nine hundred learners started the school term without toilets, ten mobile toilets have been provided according to principal Daniel Mokopi. Mxolisi Links of toilet provider Yonwabo O’loo, who had refused to supply toilets until the province had settled an account of about R21,600, told GroundUp that the Department of Public Works was “busy paying”. In the meantime, he said, he was providing the service again.