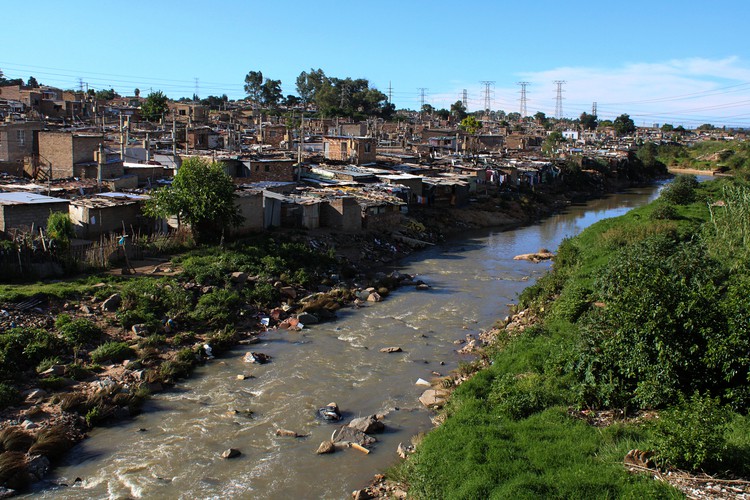 The Stjwetla Informal Settlement is located along the edge of the heavily polluted Jukskei River near Alexandra township in Johannesburg. Photo: Masego Mafata

“We are working for change, for a cleaner Alexandra and no illegal dumping,” says community activist Lerato Thabo Mopasi from Alexandra township in Johannesburg.

Mopasi recently joined other members of the newly formed Alexandra water and sanitation community forum during a cleanup at a decommissioned treatment plant. The forum was set up in October 2021 and is made up of about 70 residents. Its aim is to fix sanitation problems in the township.

It also aims to reduce illegal dumping in the heavily polluted Jukskei River that flows from Ellis Park, through central Johannesburg, parts of the City of Ekurhuleni and Alexandra to the Hartebeespoort Dam. The river is known for having a high concentration of raw sewerage and E. coli.

A report was published earlier this year by the Public Protector and the South African Human Rights Commission (SAHRC) following the devastating 2019 protests in Alexandra. It found that the City had “not provided sufficient municipal services to the community of Alexandra”. Shortcomings included inadequate housing, potholes, refuse collection, raw sewage in the Jukskei river, and poor sanitation services.

Near the banks of the river is Stjwetla informal settlement. It is littered with rubbish and has been battling with sanitation issues for years. Without access to proper services, many residents have been using the river for dumping and ablution, said Mopasi.

Several attempts to clean the river in the past have been in vain, but Mopasi is hopeful that efforts by the forum will be more sustainable. “Our members are from different schools, churches, and civil society organisations in the community. Because of this, our campaigns have a wide reach and more people will be made aware of the importance of keeping our water sources clean,” he said.

Gauteng’s Department of Water and Sanitation has applauded the forum’s efforts.

Shoki Malepe, the department’s assistant director for water, said that in collaboration with the forum and local radio stations, it will be running campaigns on conservation, caring for water resources as well as health and hygiene matters.

Mopasi added that the forum, with its community networks, will be helping to report spillages, blocked drains and burst pipes. “People don’t often know where to report water issues and information about water cuts does not reach everyone in the community. We aim to improve that communication between residents and service providers like Johannesburg Water and the Department of Water and Sanitation.”