“Independent” consultant was in fact an employee 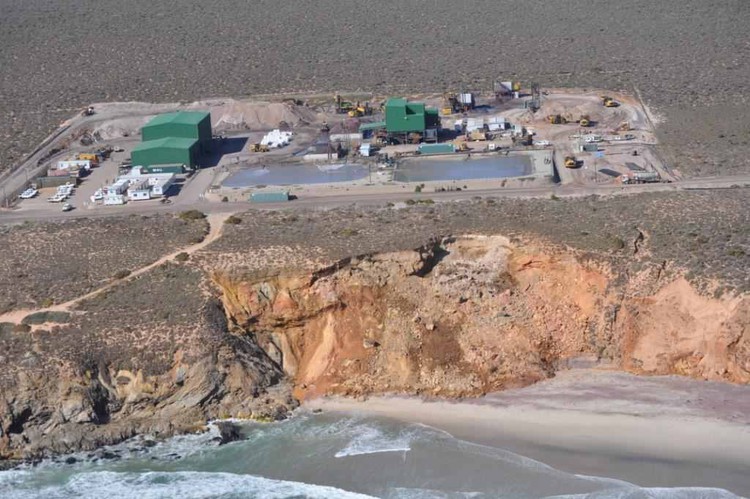 Photo taken as the cliff at the Tormin Mine on the West Coast started collapsing (Feb 2015).Photo supplied

The “independent” geological consultant who wrote that the the catastrophic collapse of a sea cliff in front of a West Coast mineral sands mine was caused by natural events was in fact employed by the mine when he wrote this in a report.

This emerged in the Western Cape High Court this week during a review application brought by Australian mining company Mineral Sands Resources (MSR) that extracts mineral sands like zircon, ilmenite, rutile, magnetite and garnet at its Tormin beach mine, 400km from Cape Town on the coast near Lutzville.

Following a search-and-seizure operation by environmental authorities in September last year, criminal charges are now being investigated against the company for causing environmental degradation.

In its review application, the mining company is asking the court to declare that the warrant for the operation was illegally obtained and to order that evidence gathered by the environmental inspectors be destroyed.

It also seeks a declaratory order to the effect that, because of the “One Environmental System” for mining introduced by the government in December 2014, full environmental authority for mining now vests with the Department of Mineral Resources (DMR) and neither DEA nor DEADP has authority for environmental compliance monitoring and/or enforcement.

The application is being opposed by the DEA and DEADP.

On Wednesday, during argument that the warrant was indeed legally obtained, advocate Ron Paschke for the two departments said the mining company had repeatedly made the “false claim” that Adriaan du Toit was its independent geological consultant. In his “Cliff Failure Memorandum” of December 2015, Du Toit wrote that the “combination of rainfall and storm activity erosion is the main reason for cliff failure during or after storm events”, and MSR’s environmental compliance officer Sibonelo Mkhize states in court papers: “[Du Toit’s] conclusion was that the main reason for cliff failure in this area is the undercutting of the cliff face by wave activity.”

But Paschke said that by Du Toit’s own admission on his profile on LinkedIn (a social networking site designed specifically for the business community), he had been employed by MSR as Exploration Manager and Mine Environmental Superintendent from January 2015 to June 2016.

The respondents cite independent consulting soil scientist Dr Johan van der Waals, who in a preliminary report in December last year said there had been no similar cliff failures in the area since 2003.

“… even though it may have been precipitated by a storm, as alluded to by Du Toit, (the collapse) was caused by a drastic alteration of the water regime in the landscape, prior to the storm… The argument that cliff failures are naturally occurring events in the area is supported, but the scale of the failure on the coastal side of the treatment facility is considered to have been induced and exacerbated by human activities and a failure to manage process water adequately,” Van der Waals wrote.

Paschke argued that none of MSR’s attacks on the issuing of the warrant were justified, and asked for the application to set the warrant aside to be dismissed. However, if the judge agreed with MSR and declared the warrant illegal, the evidence collected during the search-and-seizure operation should be preserved, he said.

Earlier, advocate Peter Hodes SC, for MSR, had argued that the warrant was invalid for several reasons, including “serious non-disclosure” and “false and misleading” statements by the environmental authorities.

The application continues on Thursday 23 February.

Mineral Sands Resources is a subsidiary of Mineral Commodities Ltd that trades on the Australian Securities Exchange as MRC. MRC is the company that for 13 years attempted to develop a mineral sands mine at Xolobeni on the Pondoland coastline of Transkei, before announcing in July last year it was selling its stake in this highly controversial project to its BEE partner.