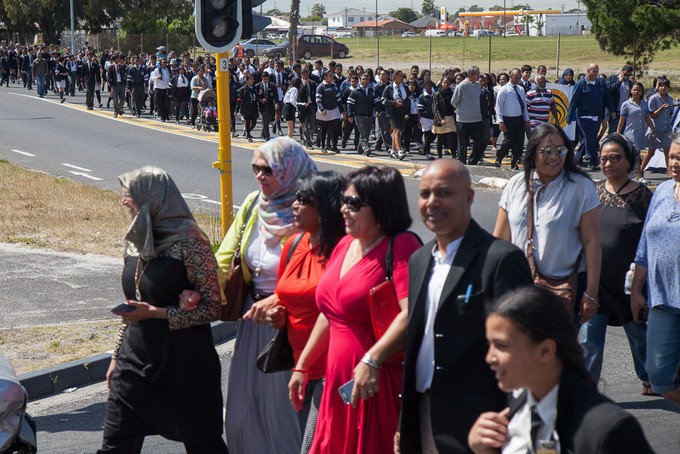 Speaking at the school during a ceremony to honour the victims of the 1985 Trojan Horse massacre, Williams said: “In the 1980s we were able to distinguish between short term demands, medium term demands and long term demands”.

“Today we don’t see that distinction being made. We must learn from the 1985 and 1986 student movement.”

“We know that education today is in crisis. And we need a sustainable solution,” Williams said.

“And so for the Fees Must Fall campaigners, I want to say: spearhead that call. Show us your theoretical understanding. Show us your position papers on where you are, and where you want to go,” said Williams.

In the 1980s, students from Belgravia High School, Alexander Sinton and Rylands High played a major role in the student protest movement.

“Athlone played a pivotal role in the history of our country,” said Williams.

Thirty-one years after the massacre, Belgravia High honoured the dead with speeches, a march and the laying of flowers at the memorial site where the violence occurred. A five minute video was shown.

Participants sang the national anthem and the struggle song Senzeni Na? (What have we done?). Flowers were laid by Belgravia High School principal Andre Buis and SAPS officers.

“This event means a lot to me because it gives me an idea about what actually went on in the struggle,” said Aaminah Pearce, a grade 12 pupil at Belgravia High.

She said her struggle was similar to those of the 1980s. “Even though apartheid is no longer in the system anymore, there are still racial inequalities, and also socio-economic inequalities” said Pearce.

Pearce said she hoped to study education next year at university.