Timeline of protest and violence in Dunoon

Concerns over housing have morphed into looting of immigrant owned shops 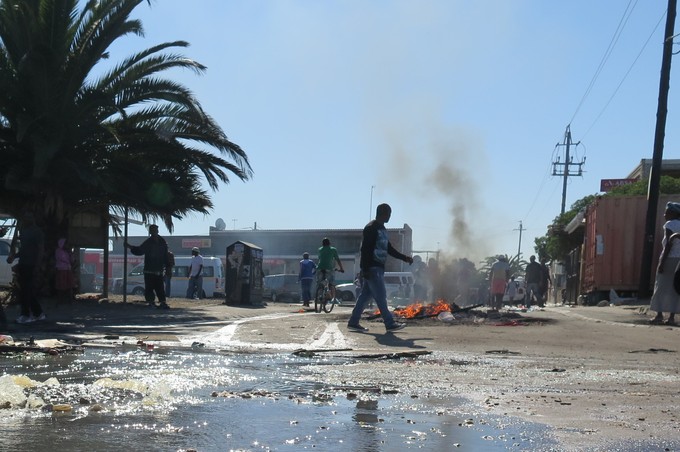 In Ward 104 — in which Dunoon is situated — two-thirds of the approximately 14,400 households live in backyard shacks or informal settlements.

Less than half of the approximately 40,000 people living in the ward are employed. Housing is a key problem. Some formal houses, of which there are about 3,765, according to online tool Wazimap, are without toilets, leading to waste being thrown in drains or on the streets. When wheelie bins are stolen, some landlords are too far from Dunoon to provide a new one, and residents instead throw their garbage on corners.

Many Dunoon residents are backyarders, people who live in the yards of other people’s homes. They usually live in shacks, and they pay rent.

In March 2016 protests broke out over the lack of housing in the area and the conditions in which people live. On Friday 18 March about 1,000 Dunoon backyarders, including children, tried to occupy open fields in the area.

“I don’t have a place to stay anymore. The lack of housing in the area has forced us to become victims of the landlords. We can’t live like that,” backyarder Khanya Mdlulwa told GroundUp in March. Mdlulwa complained of the poor conditions in which she was forced to live. Her landlord evicted her during the protests.

Law enforcement tried to take down the structures on the occupied land. Some residents then burnt a MyCiTi bus station, obstructed roads, and threw stones at motorists. They also set the community hall and local ward councillor’s offices on fire.

Protests continued that week. Backyarders told GroundUp in March that most had been told by their landlords that they could not go back to the houses they were renting.

Until the City of Cape Town addresses the area’s housing issue, the backyarders said they would continue to occupy open land.

In early April, thousands of the backyarders marched to the Civic Centre to hand over a memorandum to Mayor Patricia de Lille. Their concerns centred on their inability to pay their current rent and the lack of available land for them to build their own homes. Many, perhaps most, of the marchers were wearing Economic Freedom Fighters (EFF) colors.

Community leader Xolani Cekiso said he hoped that the memorandum might allow the mayor to better understand the marchers’ demands. He also spoke of his frustration that Ward 104 councillor Lubabalo Makeleni had not followed through on past promises.

The marchers’ memorandum demanded land to build houses, improved services in Dunoon and improved infrastructure. After reading the memorandum, Tlhabanelo Diholo said that the marchers’ expect a response in seven days. If they did not receive one, they threatened they would occupy open land without permission.

Following the unrest, immigrants’ shops in Dunoon were looted and destroyed on the night of 17 April.

The shop of Sucdi Omar, a Somali woman, was looted. Her family had come to South Africa and established their Dunoon shop in 2005. The language surrounding the Sunday lootings is reminiscent of xenophobic attacks in 2008.

“They [the protestors] want the government to see, these people are making noise,” she said.

“They say, ‘you have money, you have a shop, we have nothing,’” Omar said.

Shop owners claimed the police were nowhere to be seen.

Constable Noloyiso Rwexana, spokesperson for SAPS Western Cape, said “a case of public violence was opened for investigation” and that police are “on the scene monitoring the situation”.

She said, “12 suspects were arrested”.

Mayor de Lille, in a statement on 19 April, condemned the violence in Dunoon. She said she had met Dunoon community leaders, including the ward’s councillor, Makeleni, on 18 April following the violence.

She wrote, “Collectively, we condemn what these EFF thugs and gangsters are doing. It is increasing the suffering of all the people of Dunoon. Children are being prevented from going to school, and parents are being prevented from going to work to provide for their families.” She added that she would be meeting with Dunoon leaders again next week.

The EFF responded with an open letter to de Lille regarding Dunoon. “The truth is that the DA cannot and will not provide for the poor,” it read. “You have opted to use cheap politics in reducing the genuine struggle of the Dunoon residents into xenophobic attacks.”