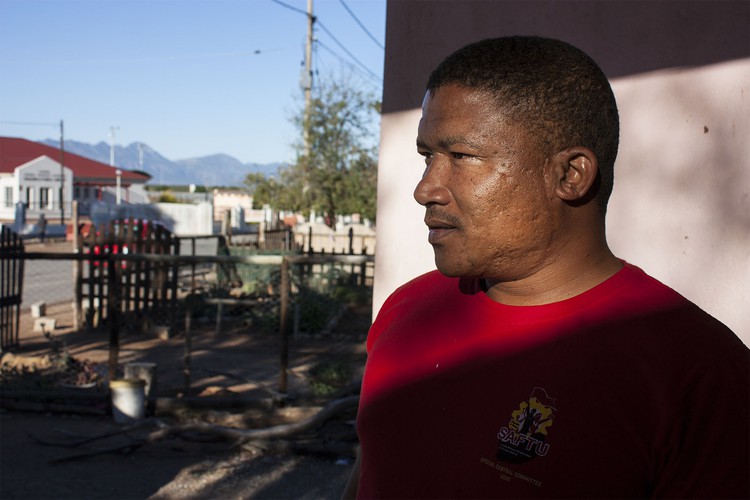 Deputy General Secretary of CSAAWU, Deneco Dube, says a strike at Robertson Winery is a possibility. The union and the company have not reached agreement on several issues. Photo: Steve Kretzmann

Workers are frustrated with negotiations over wages and labour conditions at Robertson Winery and a strike is on the table. The current round of talks are the first since a prolonged 14-week strike in 2016 during which a three-year deal was hammered out.

The agreement in which workers got an 8% or R400 increase (whichever was greater) in 2016, followed boycotts that garnered international attention. It came to an end in April this year, and representatives from the Commercial, Stevedoring, Agricultural and Allied Workers Union (CSAAWU) and Robertson Winery management came to sit around the table on 6 May. CSAAWU has 85 members at the winery, out of a total of 341 employees including top management.

A second meeting was held on 22 May, but Robertson Winery shop steward Emile Maseko says workers feel the company is not taking their requests seriously.

Maseko said the initial list of 22 demands had been cut down to seven main issues, but the company did not even want to acknowledge these.

Among the sticking points was a minimum wage of R8,500 a month, a guaranteed 13th cheque, and company transport for workers. This last demand is because entry level workers, who are paid R4,300 a month but only take home about R3,700 after deductions, are spending R300 a month on transport, more than 8% of their nett earnings.

CSAAWU Deputy General Secretary Deneco Dube said the company offered a 6% wage increase across the board on Wednesday. This would be an increase of R258 for general workers, which Maseko said after tax and UIF, was not a meaningful increase.

He suggested that R500 would help “close the wage gap between the general worker and top management”.

Although this would peg the minimum salary at R4,800 a month, which was still a far cry from the request for R8,500, “workers would accept it”, he said.

Robertson Winery Human Resources Manager Reinette Jordaan would not comment on most of the workers’ demands. She said Robertson Winery was “not prepared to speak about what has been agreed to or on what points we disagree”. This remained confidential as negotiations were ongoing.

Maseko said in 2016 it had been revealed that the CEO was earning R109,000 a month. Jordaan would not divulge what top management earned and said she was under no obligation to do so as Robertson Winery is a private company.

A 13th cheque was the other sticking point. Dube said the company would only provide a bonus equal to a month’s salary if there was no unauthorised absenteeism.

“The company said no, it’s a form of disciplinary action and they’ll keep it as it is.”

Dube said management indicated they could not provide free daily transport for all workers, but ensured transport was available for workers starting before 6am or ending their shift after 6pm. However, Maseko said those who worked the 5am early shift were having to sort out their own transport.

Both Dube and Maseko said Robertson Winery discriminated along racial lines, with white workers getting paid more than their black colleagues for the same work. This was a problem back in 2016, said Dube, and the company was supposed to have dealt with these discriminatory practices. The union was also dissatisfied with transformation at the company, which was also part of the 2016 deal.

In October 2017, there was one white man in top management and five white men and two white women in senior management. At mid-management level there were 11 white men, eight white women, three coloured men, one coloured woman and one African woman.

This was unacceptable and showed the company did not take transformation seriously, said Dube.

Jordaan said the company’s staff and transformation structure was confidential, although it had been shared with CSAAWU.

She said the negotiations were “very positive so far compared to 2016”.

“I’m sure we’ll reach an agreement. A lot of points were dealt with on Wednesday. I’m sure we’ll have a constructive settlement this year.”

Although the possibility of a strike was “on the table”, a strike “would be unfortunate”.

However, she said, having survived the 14-week strike in 2016, she was sure the company could cope should there be another one, even though it would create difficulties. The next meeting between workers and management is scheduled for 6 June.

Meanwhile, talks between CSAAWU and Oak Valley Estate in Grabouw were deadlocked this week.

Dube said a strike by workers at Breëriviervallei Bottelering (BBK) was planned for next week as wage negotiations had deadlocked since February.