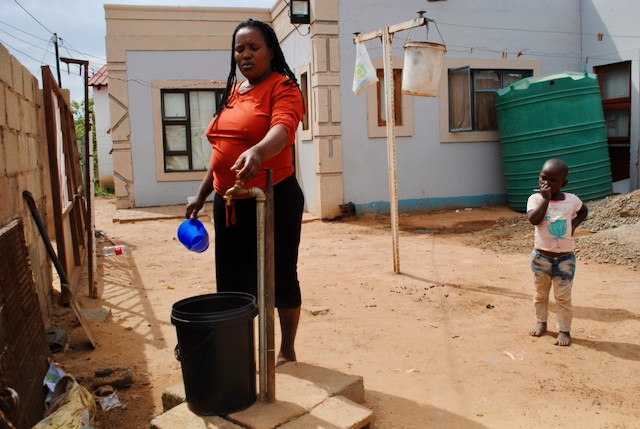 Thousands of people in Joe Slovo Extension in Mthatha are struggling to conduct their lives without a proper water supply. Municipally provided jojo tanks haven’t had water since August, and King Sabata Dalindyebo Local Municipality did not warn them that there was going to be a water crisis, say residents.

Joe Slovo Extension, next to Joe Slovo Park, was established informally in 2007. It still has no proper bulk water infrastructure. Residents collect rain water or fetch water from other areas and neighbouring townships. Workers take containers with them to fill at work. Many people are also buying water in town.

Those who cannot afford to buy water or pay people to fetch it, have resorted to using dirty water from drains to do laundry and wash. As early as 5am, parents and small children can be seen fetching water from a drain. 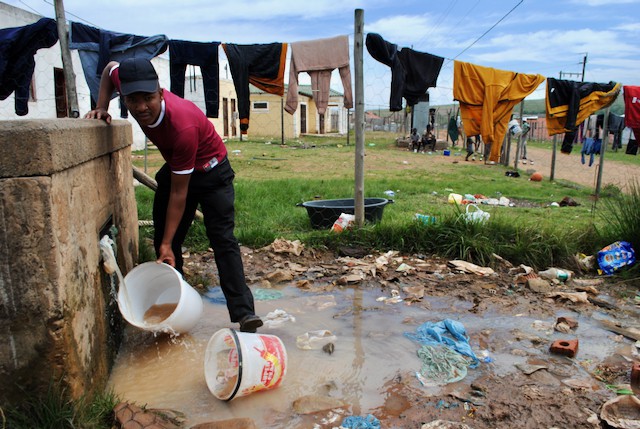 “We don’t understand why an old area with more than 4,000 households can still be without bulk water supply,” said Siphiwo Sineke, a community leader.

“Myself and other residents decided to buy our own water pipes to make water connections from Joe Slovo Park after many years of asking the municipality to provide us with water.”

But there have been frequent outages to these illegal connections.

“From two weeks to a month our taps stay without water,” he said. “If by luck water comes in our makeshift taps, we quickly fill up our drums.” He accused the municipality of only delivering water when it wanted votes.

Nomaphelo Matyaba, of Emasimini area, has a hair salon. It supports her and her four children. But, she said, the water shortage has brought the settlement to a standstill. “I can’t wash the people’s hair and that is a loss of income for me.”

“The 5,000-litre municipal jojo tank that is placed in my yard for the whole community was last filled with water by the municipality in August when we had a water crisis for two months,” she said.

“All of us here use pit toilets. I share mine with two other households who have families of three and four members. After using the toilet we don’t wash our hands.”

She is one of the people who fetches water from the drain.

“For bath water we boil the water first. But my children’s white school shirts have been damaged. They have lost their colour. I spend R20 on a taxi to go to CBD and buy five litres of drinking water for R20.”

“Since 2015, I have been carrying a bucket of water on my head with a baby on my back fetching water about five kilometres away. Then I decided to join other residents and make my own water connection because we don’t even have communal taps here.”

Mjali said she has her own 5,000-litre jojo tank but does not have money to buy gutters to channel rainwater to it. “I survive on a child support grant,” she said.

“KSD municipality used to announce when there will be water outages. But this time we have not heard from them. We are on our own,” she said.

Mayizukiswe Ntlomelo said he used to fetch water with a wheelbarrow, filling four 25-litres containers at his cousin’s place in Joe Slovo Park.

“In 2018, I decided to make an illegal connection to have water in my yard. Currently our taps and my cousin’s jojo tank have dried up. Now we have no option but to use this dirty drain water for our clothes and to wash ourselves.”

Its spokesperson, Zimkhita Macingwane, said the problems were caused by illegal water connections and this stems from a lack of budget for informal settlements.

“We have asked the water and sanitation unit to follow up on this matter,” he said.