“It is undignified and we will not allow that” 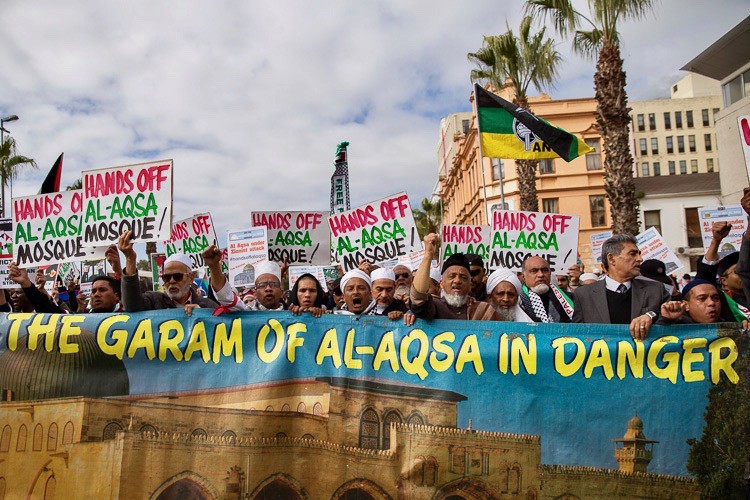 Over 2,000 people marched from Keizersgracht Street to Parliament chanting “Free, free Palestine!” and “Down Netanyahu, down!” on Wednesday. They were marching against the installation of metal detectors and other security measures at the al-Aqsa Mosque in Jerusalem.

Protesters said recent security measures at al-Aqsa, including the use of security cameras, are unfair. “They’ve got high-resolution security cameras that can see through the clothing of our men, and more so, of our women… it is undignified and we will not allow that,” said Anwah Nagia from the Palestine Museum in Cape Town.

The metal detectors were removed Tuesday after Muslim worshippers boycotted the mosque.

The mosque is located in the Old City of East Jerusalem. Nagia addressed the protesters: “It is not [an issue of Jewish versus Muslim]…it is an issue of occupation and human rights violations.”

“We know the pain of state capture in South Africa, but this is state capture of the Holy Land of the Muslims,” said Sheikh Riad Fataar, third-in-charge at the Muslim Judicial Council (MJC). “Today we have shown that we stand together as oppressed people,” he said. “We will march until we see relief for the Palestinian people.”