Hundreds of outsourced workers on strike at Coega export company 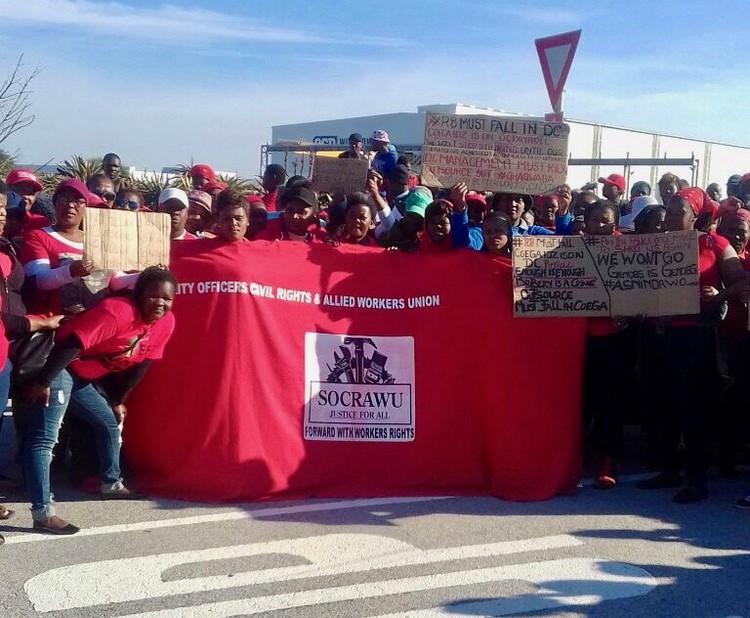 Since 24 May, hundreds of workers have been on strike at Dynamic Commodities, an export fruit and ice cream manufacturing company operating from the Coega Industrial Development Zone in Port Elizabeth.

The workers are contracted by labour broker firm, Outsource. They are demanding an increase in their wages and an improvement in working conditions.

Security Officers Civil Rights and Allied Workers Union (Socrawu) Eastern Cape Provincial Organizer Thokozani Nogoqa said, “We are angry that Outsource does not want our members to organise in their factory. … The bone of contention is the working conditions of the workers.”

He said people were working over 12 hours in fridges. He said the company refused to provide special clothing, and did not provide transport at night, when some of the employees lived as far away as Uitenhage and New Brighton.

Socrawu member Samson Brown said, “We are tired of working for labour brokers … We have members who are earning R8.34 an hour. Most of our members have been working for this company for many years, but they are still casual workers.”

Brown said, “Managers don’t allow workers to visit the toilet, often. We have experienced numerous cases where workers ended up peeing on themselves because they were not allowed to go to the toilets.”

Brown also said, “There is not even one black person at the management level. All managers are white and coloured people.”

Zine Nyengule is a line inspector earning R13.96 an hour. “I am not even a permanent worker, despite the number of years I have been here. We work till late in the night and we are not paid for overtime.”

She also accused the managers of using racist language.

Vuyokazi Hlati, a line inspector earning R16.50 an hour, said, “We are the last to leave the company after the product is finished. We are not allowed to leave the product half done. We always face the risk of getting robbed when we are going home, because the company is deep in the bushes. We get transport at night after walking for a distance of four kilometres away from here. We are also not paid for going home late.”

Cronje Van Zyl, legal adviser and Member of Outsource, said, “The problem is with the worker’s union. We don’t recognise it.” He said the union did not have organisational rights as it was registered in the security sector not certified for food production.

He said, “In February, the union took us to the CCMA but withdrew their case after they discovered that their Constitution doesn’t extend to their particular workers’ rights [at Dynamic Commodities].”

According to Van Zyl the dispute was over a provident fund and the dismissal of an employee.

Asked about working conditions, he said employees did have to ask for consent to go to the toilet but “they’re given at least 30 minutes. They also have 45 minutes for lunch.”

He said wages had not been declared as a dispute. “We have core workers and seasonal workers whose wages are different. R8.34 an hour is paid to new seasonal employees.”

He said only the core employees who work in the freezers are given protective jackets, not seasonal workers.